Breaking Into New Markets: Are Acquisitions Worth The Risk?

Keeping up with the latest market trends isn’t always easy. After all, running a business takes a lot of focus and energy.

However, it’s still important to understand that markets, sectors and retail are continuously changing and, in order to stay ahead of the game, companies must move with the times and spot new market opportunities and buy into them first.

One of the biggest drivers of entering new markets and new regions is the fear that if a company fails to innovate, it fails. This mantra can be heard across boardrooms around the globe and it fuels the drive for expansion, exploring new markets and keeping up with competitors.

However, it should be noted that entering a new or emerging market will have its risks in terms of infrastructure, taxation and political stability. It is imperative to remember that mitigating the obvious risks will mean spending time in these markets researching. This involves consulting professional advisors, speaking to colleagues with experience of the local sector and assuring due diligence is maintained when conducting a thorough investigation into the current and historical data of the market sector being entered.

What can we learn from Amazon’s aggressive entry into new markets?

One example of a company entering a new market right now is Amazon launching into Singapore with Amazon Prime. It used social media influencers to introduce its new service offering to the region as well as a more aggressive brand marketing effort. Picking Singapore as its first entry into Southeast Asia has more to do with Singapore’s more Westernised culture than it has with market share. While Singapore only has a population of 5 million, it is the bigger markets of Indonesia, Malaysia and Thailand that Amazon has its sights set on.

Already rivals like Alibaba have acquired local e-commerce platforms like Lazada (in a similar move to Amazon’s entry into the Middle East by purchasing Souq.com), looking to secure a stake in an e-commerce economy that is set to grow from $5.5 billion to over $87.8 billion in 2025. It is a very competitive online marketplace and it happens to be one that is home to over 600 million people, many of whom are only just beginning to get internet access.

Amazon’s move into Singapore is by no means guaranteed to be successful. If it cannot gain cultural acceptance, it might not be able to leapfrog into the rest of Southeast Asia. When Walmart decided to open 85 shops in Germany in 1997, it didn’t account for restricted opening hours, regulatory red tape and local shopping preferences, including unnecessary staff greeting procedures or having their shopping bagged up for them. They lasted less than a decade and pulled out at a cost of $1 billion.

Timing also has to be right too. When American company Best Buy bought a 50% stake in Carphone Warehouse for $1.3 billion in 2010, the electronics retailer had huge plans to launch 200 stores in the UK. But choosing the downslope after the economic collapse proved to be too big a hurdle and it closed the 11 outlets it had opened within two years of entering the UK at a cost of nearly half a billion dollars.

Entering a new market isn’t always easy. Brands in home markets are usually created over time and are specific to the economy, culture and demographic of that region. Which is why making key acquisitions – like Amazon’s purchase of Whole Food Markets for $13.7 billion as part of a strategy for entering the food retail and delivery market – is a preferred route for many expanding companies. 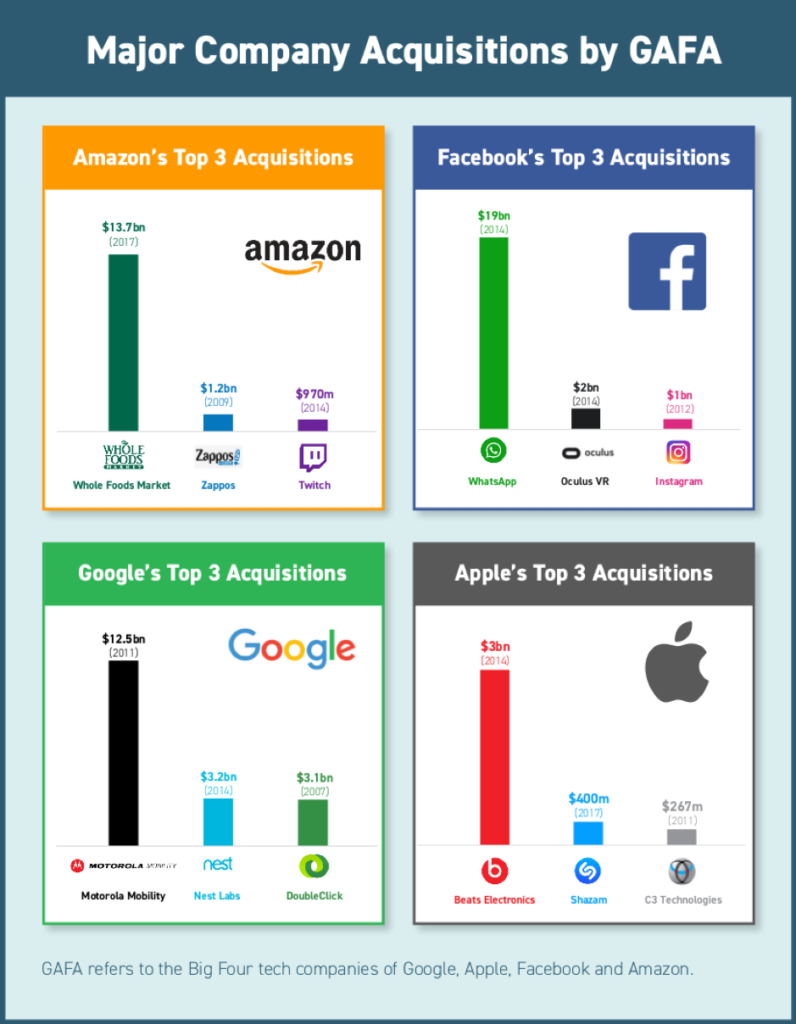 Achieving market expansion, especially in foreign markets, has often meant taking over other leading players to gain immediate competitive position and advantage. Rolls Royce exemplifies this strategy in its marine business by taking over competing businesses including Vickers, Ulstein, Bird-Johnson, Aquamaster and Kamewa. Acquiring these businesses immediately added skills, products, brands and most importantly market share. It allowed Rolls Royce to capture the market to fit and supply all marine craft from cruise ships to offshore oil support and naval air support too, maintaining its market-leading position. 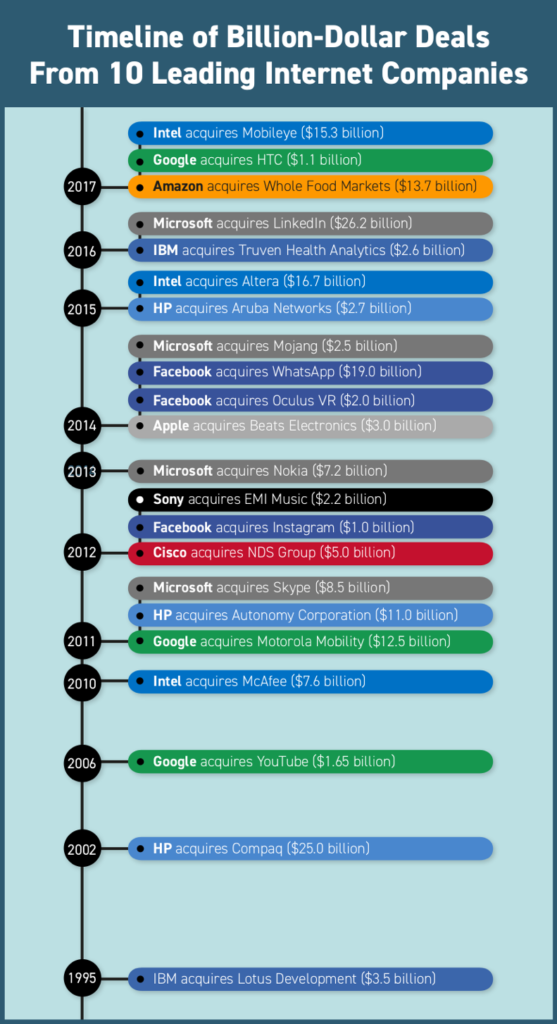 Acquisition is a strategy that the major computer companies have adopted too to get into new regions and markets. Microsoft used it to get into the mobile phone sector when it purchased Nokia in 2013 for $7.2 billion and it captured Skype for $8.5 billion to get a stake in the online video conferencing market. Then there is Google’s acquisition of Oculus VR in 2014 for $2.0 billion which saw it get an important foothold in the emerging virtual reality market. 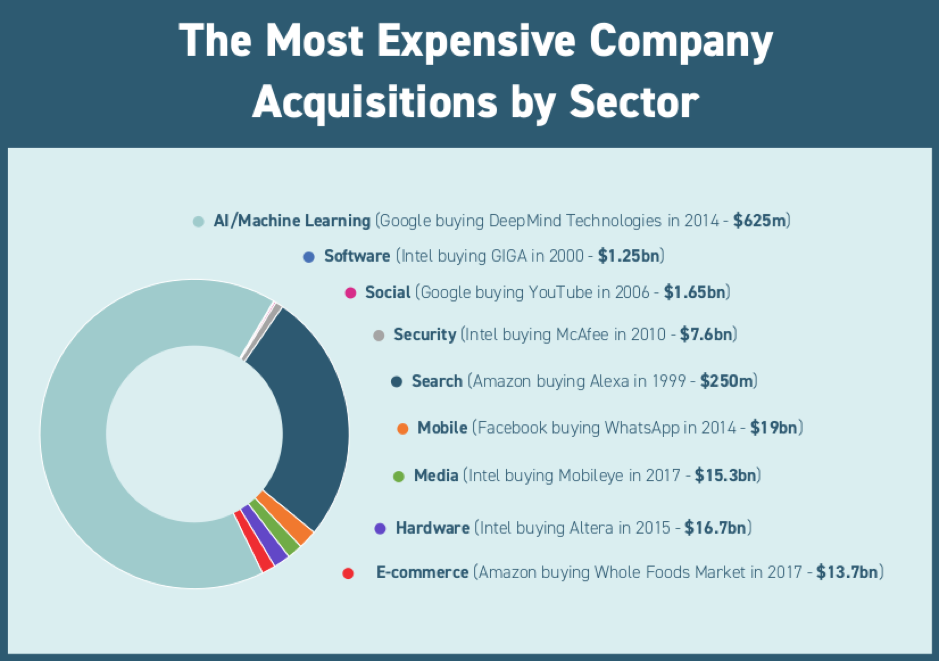 For investors spotting these acquisitions at the same time as the big tech firms do is a useful way for traders to ‘piggyback’ a similar kind of strategy. Traders using a CFD account in Singapore often only need to look at their own region for takeover opportunities. Two clear examples include Malaysian wireless giant Axiata Group’s decision to complete a buyout of Singapore operator M1, or the Courts Asia buy out offer from Japanese retailer Nojima, which resulted in a share price that rocketed 31.6% the same day.

While many successful businesses don’t follow the crowd, preferring to plough new ground and use innovation and planning to stand out, paying attention to what others are doing and how they are doing it can offer a pretty good indication of emerging trends and markets. And, while the strategies of market-leading companies in other sectors can be a tempting high ticket purchase, they can be risky endeavours too. Without careful research of the market and the timing of any acquisition, things can spiral out of hand, but it can also be a way of expanding an organisation’s offering and being innovative with market capitalisation.