The State of Fintech in Laos

If you attend any tech conference with a panel discussing VC investments, you will most likely hear that Southeast Asia is the growth market to invest in over the next 15 years. So far though, research concludes that Southeast Asia remains underpenetrated by Venture Capital Firms or Angel Investors. VC panelists at IBM Connect 2017 highlighted that Southeast Asia’s venture ecosystem reminded them of China’s early days.

Unlike in China or India, founders in Southeast Asia didn’t need to be local to be successful, thus VC’s have the opportunity to invest in founders from all over the world, who chose to base themselves somewhere in Southeast Asia. Absent from these considerations is one of Southeast Asia’s least developed country though, the Lao People’s Democratic Republic.

With a population of approximately 7 million inhabitants it ranks 8th of the 10 ASEAN members if measured by population, ahead of Singapore and Brunei. For the last 10 years Laos has consistently been able to produce GDP growth over 7% and the country has a young population, with half of it being under 25 years, while approximately one in three of the total population lives in an urban area. 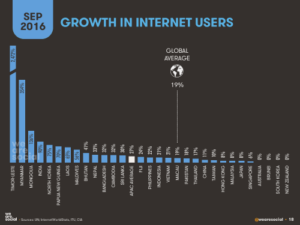 According to wearesocial, Lao did register a significant growth in internet users in 2016 at 69%, yet surprisingly saw a 28% year-on-year drop in mobile connection growth.

While financial inclusion is being prominently mentioned in numerous sustainable development reports and the unbanked populated of Lao accumulating to approximately 60%, the founding of the first Lao fintech startup has yet to happen. What are the reasons for Lao PDR lagging far behind its neighboring countries in regards to the development of fintech solutions, or, as Fintechnews found, a startup ecosystem in general? 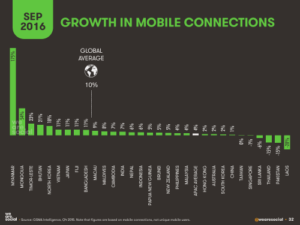 According to a study conducted by the Laos-Australia Development Learning Facility, people prefer cash for a variety of reasons, among them the high cost and the time consuming process of available digital finance services, as well as cash payments being a habit.

During a visit of the Mekong Angel Investors Network (MAIN) in Vientiane in September 2016, investors found that the startup ecosystem was still in its infancy and thus startups were not investment ready yet. Local startups instead required advising to refine their business models.

In order for the local startup ecosystem to grow the government will have to invest into education, among them English and critical thinking skills, as well as consider changes in the regulatory policy of startups.

The only fintech solution so far has come from The Banque Pour Le Commeree Exterieur Lao (BCEL), a state-owned commercial bank, which in 2013 entered into an agreement with CyberSource, the California-based e-commerce credit card payment system which was acquired by Visa Inc. in 2010 for $2 billion USD, to offer secure online payment for its merchant customers.

The next fintech company in Laos might be launched pretty soon with help from neighboring Thailand, as the Bangkok-based currency exchange giant SuperRich has confirmed that the company is working on a digital platform for foreign exchange, cash transfers and payment services and has already contacted a potential local partner in Lao while seeking approval from Lao authorities.

It’s Official, Laos Doubles Down on Crypto-Ban in Recent Announcement