World Bank President: ‘Universal Access To Financial Services Is Within Reach – Thanks To New Technologies’

In fact, many fintech startups have pledged their support for universal financial inclusion. Some believe that bitcoin and its underlying technology the blockchain offer many opportunities for underbanked populations, including the ability to have a digital instrument to store, send and receive funds.

Startups such as Hong Kong-based BitSpark or Singaporean Toast, are leveraging blockchain technology to enable faster and cheaper remittances to Southeast Asia where families are largely relying on funds sent home from relatives working overseas.

According to a report from Research and Markets, the three largest remittance recipient countries are from Asia-Pacific, with the Philippines and Vietnam contributing to more than half of Southeast Asia’s total remittances.

Launched in late-2013, the UFA2020 program is an initiative aimed at reaching universal financial inclusion and enable two billion adults to gain access to basic financial services such as owning a bank account or having a digital wallet to store money, send payments and receive deposits, by 2020. 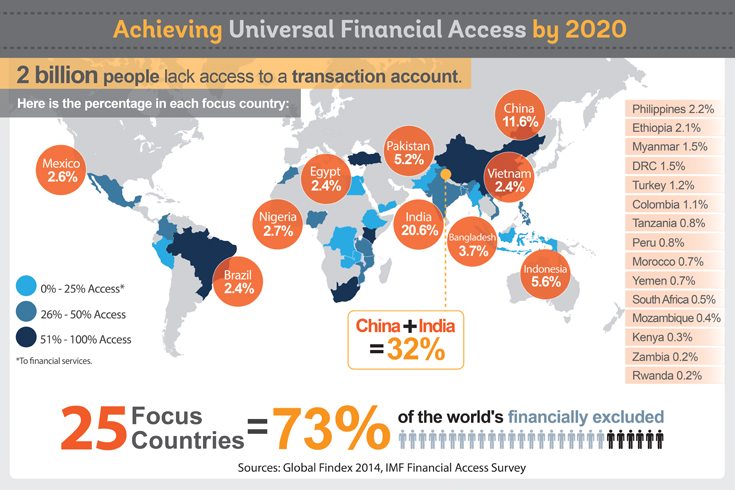 According to the Bank Group, its role has been so far to encourage investment and innovation led by the private sector. The group has also been helping countries setting up evidence-based regulatory reforms and help drive expanded access to financial services.

Most particularly, its approach has been focused on sensitizing both the public and private sector by introducing transaction accounts, expanding access points and driving scale and viability through government programs.

“By focusing the very best resources on financial inclusion from all around the Bank Group, we are providing our clients with a tailored package of financial, knowledge, advisory, and convening services,” Gloria Grandolini, senior director of Finance and Markets GP at the World Bank Group said.

Additionally, the World Bank Group has been working with countries to strengthen “key building blocks,” including political and stakeholder commitment, enabling legal and regulatory environment, and bolstering payment systems and ICT infrastructure. 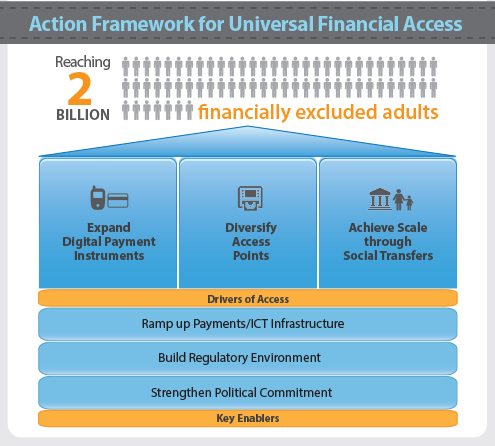 Partners and their commitments for the UFA2020 program include:

While the World Bank’s Global Findex suggests that significant progress has been made between 2011 and 2014 with 700 million people gaining access to formal financial services during that time period, there is still place for improvement.

Notably, women in developing countries are still 20% less likely to have a bank account than men, according to the organization.

Hence, the Global Banking Alliance for Women (GBA) and its members Banco Pichincha of Ecuador and Diamond Bank Plc of Nigeria, pledged its support in April to help fill the gender gap in financial inclusion.

“Women who lack access to financial services face a number of related obstacles, including lower income and business growth, lower asset ownership – making it harder to borrow – and lower levels of financial capability,” said GBA. “Commercial banks can and must play a vital role in closing the financial access gender gap.”

ADYEN Expands Its Presence In APAC: New Singapore Office and The Partnership with Grab