According to the study, the key innovation with CBDC is the ability for individuals and firms to hold direct accounts with the central banks and to transact directly with one another using the digital currency as a legal tender.

“This has been made possible by the technology used in private digital currencies, namely the distributed ledger technology (DLT),” the document says.

With the rising interest in and usage of “private digital currencies” like Bitcoin, central banks around the world have been wondering whether they should consider issuing digital currencies themselves. And in this field, countries like the US, China, and Sweden have shown interest in the concept and experimentations in Canada and Singapore have been focusing on improving the efficiency of the wholesale payments and settlements system. 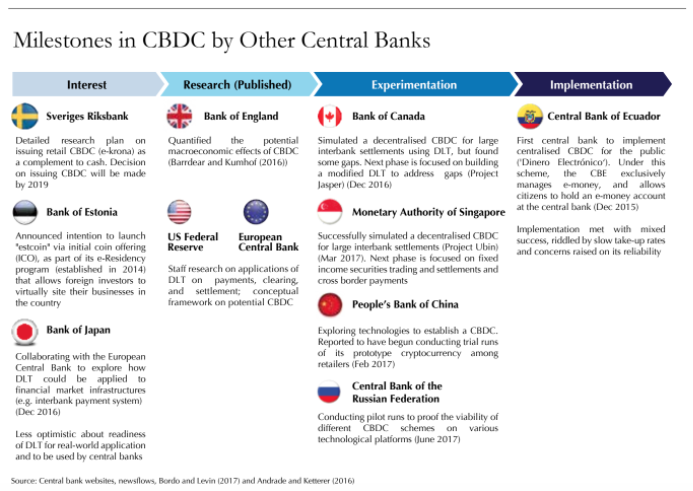 By leveraging blockchain technology, CBDC could to unlock central banks’ ability to capture rapid, real time economic surveillance, the report says. But while the potential impact to the transmission of monetary policy is recognized, the full extent of CBDC is unclear and research is still nascent. In addition to that the report does not indicate any plans to introduce a Bank Negara Malaysia Cyrptocurrency or Digital Currency.

The paper comes as at a time when the Malaysian central bank is looking to regulate cryptocurrencies.

Bank Negara governor Tan Sri Muhammad Ibrahim said earlier this month that the central bank would make a decision by the end of the year on whether or not cryptocurrencies would be considered a legal investment scheme in Malaysia.

Muhammad said that if Bank Negara decided to recognize cryptocurrencies, then guidelines would be issued on Malaysia’s approach towards investing in it.

“The guidelines that we will be issuing before the end of the year will address issues in terms of registering the players, collecting data and ensuring that whatever they do will be transparent,” he told reporters on the sidelines of the 9th International Conference on Financial Crime and Terrorism Financing (ICFCT).

The central bank last commented on cryptocurrencies more than three years ago when a statement was issued in early 2014 stating that Bitcoin was not recognized as legal tender in Malaysia and that it did not regulate activities involving cryptocurrencies.

Since then, cryptocurrencies have surged in popularity and attracted much attention internationally.

While Malaysia is weighing in on the decision, other jurisdictions including China and South Korea are cracking down on cryptocurrencies. In September, China banned initial coin offerings (ICOs) and ordered the closure of cryptocurrency exchanges.

Shortly after, South Korea’s financial regulator said it too will ban ICOs, stating that trading of digital currencies needs to be tightly controlled and monitored.

10 years Blockchain. The Race is on: Blockchain vs. Tangle vs. Hashgraph

The Potential of the Cryptocurrency Market