Fintech in thriving in Switzerland, aided by initiatives from both the public and private sectors to foster innovation in the financial services industry.

Accelerators, incubators and innovation labs such as blockchain-focused Nexussquared, Fintech Fusion, Kickstart Accelerator and Lab by Swiss Life, have contributed to put Switzerland on the global fintech map. These have helped homegrown startups gain international visibility and also act as platforms for foreign startups looking to enter into the Swiss market.

The F10 Fintech Incubator and Accelerator is an example of the Swiss financial industry’s commitment to learn from and partner with young, tech-focused startups from around the world. 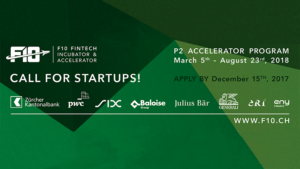 F10 is sponsored by SIX and counts amongst its corporate members Zürcher Kantonalbank, PwC, Julius Baer Group, Generali and Baloise Group. It is one of the largest and most successful startup accelerators in the country focusing on fintech, insurtech and regtech.

F10 is now accepting applications for its 2018’s first round of “P2 (Prototype to Product) Program.” Startups have until December 15, 2017 to submit their application. The program will start on March 05 and run until August 23, 2018.

A collaborative approach towards fintech innovation

In its quest to become a global fintech leader, Switzerland has joined hands with several other countries, notably in Asia, to help its startups expand to new markets while at the same time facilitating the entrance of foreign startups into Switzerland. 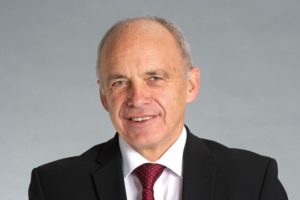 A bilateral cooperation agreement signed with the Monetary Authority of Singapore (MAS) last year demonstrated Switzerland’s commitment in this regard. The agreement seeks to create opportunities for fintech businesses from Singapore and Switzerland to expand into each other’s markets by providing a framework for companies in the two countries to establish initial discussions in each other’s market and understand regulatory requirements.

Swiss fintech minister Ueli Maurer traveled across Asia earlier this year to meet with ministries and authorities, state institutions and financial center players in Beijing, Shanghai, Hong Kong and Singapore. The purpose of his Asian trip was to discuss cooperation at the state and private sector levels on the best framework and conditions to support innovation in the financial sector.

Most recently, the Swiss Finance + Technology Association teamed up with the Singapore Fintech Association to link the two hubs. The aim is to foster greater fintech cooperation between the two communities and nurture global business opportunities.

Switzerland, the gateway to Europe

But beyond its commitment to fintech, Switzerland has also all the key factors that make it a great location to expand a business.

Switzerland is surrounded by Europe’s major economies, Germany, France, Italy and Austria, and is right in the heart of Europe’s most densely populated area. It is one of the most business-friendly locations in the world and is often the favored location for firms looking to expand into Europe, Africa or the Middle East.

Plus, Switzerland is one of the most advanced countries in research and development, supported by one of the most efficient public education systems which is providing the economy with highly-qualified workers. It is also the world’s biggest spender on IT and is considered a good test ground for the introduction of technology innovations.

For nine years in a row, Switzerland was ranked top of the class in the World Economic Forum’s Global Competitiveness Index, which “measures the set of institutions, policies, and factors that set the sustainable current and medium-term levels of economic prosperity.”