The Philippines’ startup ecosystem is growing rapidly with more and more young professionals starting their own ventures. According to a study by QBO Innovation Hub and PwC Philippines, there are now more than 300 startups in the country, most of which being founded between 2012 and 2017.

The 2017 Philippine Startup Survey found that despite the global and local uncertainties, 54% of the founders polled still started new businesses between 2016 and 2017. This is indicative of the high level of confidence in the country’s economy, government and general business environment, according to the report. In fact, 86% of the 106 CEOs and founders surveyed believe that business outlook in the country will be better in the next 12 months. 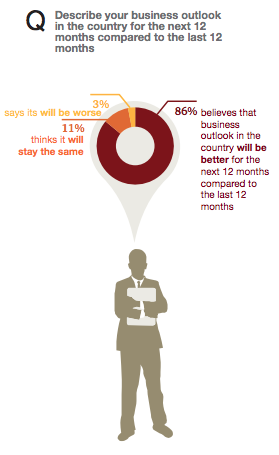 Regardless of the overall confidence and optimism, more than half of local startups that want to grow said that they were looking into tapping foreign markets, implying that the Philippines may “not be ready” for their products. 61% of startups said that they wanted to enter new territories as part of their “strategies for growth in the next three to five years.”

Among the key challenges, founders cited capital requirement (88%) as the number one hindrance they encountered when starting their businesses, followed by regulatory requirements (54%), and general economics and business conditions (50%).

63% plan to raise funding through external parties such as venture capital funds and other investors to finance their growth. 47% are looking to raise less than US$1 million, and 27% between US$1 million and US$3 million.

With the rising number of entrepreneurs in the Philippines, the government launched programs to help strengthen their business and compete with foreign players.

And because universities focus on traditional programs, the government approved the Youth Entrepreneurship Act in 2015 to promote the development of young Filipinos in the areas of finance and entrepreneurship. Through this Act, the government intends to change the mindset of Filipinos – from wanting to be employees to being business owners.

Fintech in the Philippines

Magellan Fetalino, the founder and CEO of Acudeen Technologies, was one of the entrepreneurs interviewed for the study.

Fetalino shared his views on the current state of fintech in the Philippines, stating:

“There’s a good number of players right now in the Philippines. It’s very exciting and it’s an exciting sector to be part of.

“The good thing is if you enter the space, you won’t really feel the competition. There’s a lot of collaborative effort among the players because we complement each other. I think that this holistic collaborative ecosystem is what pushes everybody upwards. I think the pie is big enough for everyone to share.”

His startup, Acudeen Technologies, provides a peer-to-peer marketplace that connects small and medium-sized enterprises in the Philippines to financial institutions through invoice discounting. The company processed more than PHP200 million in receivables in over a year, and counts among its partners Rizal Commercial Banking Corporation and Dun and Bradstreet.

For Robertson Chiang, the founder of Dragonpay, the government has largely contributed to the rise of the Filipino fintech scene.

“What is interesting with the new [Bangko Sentral ng Pilipinas] governor, Governor Espenilla, is he seems very forward-thinking,” Chiang said. “He’s been in the post for a couple of months, and so far things have started moving […] With all the innovation in fintech, I think it’s good to have a liberal thinking and progressive governor.”

Chiang founded Dragonpay in 2010 after realizing the insufficient financial infrastructure to support the growth of online deals. He created Dragonpay with the vision of creating alternative ways of making online payments.