The Potential of AI in Banking

Artificial intelligence (AI), an umbrella term for a host of different technologies including machine learning and natural language, holds many promises in the banking industry. Analysts estimates that AI could save the industry more than US$1 trillion by 2030. 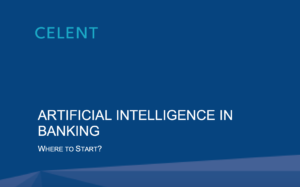 Artificial Intelligence in Banking: Where to Start?, Celent

While today’s AI is not yet ready to entirely replace humans, it will instead augment them, letting them move into more value-adding activities, freeing them from rote actions, making them more efficient, and performing calculations that would be physically impossible for a single person, according to a Celent report titled Artificial Intelligence in Banking: Where to Start?

The current evolving AI has been made possible by foundational technologies, most notably machine learning and language manipulation.

Machine learning is a method of data analysis that automates analytical model building. Machine learning occurs when computers change their parameters/algorithms on exposure to new data without humans having to reprogram them. By processing more data than a human ever could, and then using that data to teach itself by spotting patterns, machine learning makes it possible to draw insights that previously would have remained undiscovered.

Another key technology is natural language processing (NLP), which refers to the ability of technology to use human communication, naturally spoken or written, as an input that prompts computer activity.

Finally, natural language generation (NLG) refers to the ability for technology to produce human quality prose. It sorts through large amounts of available data to produce a human-sounding response. NLG can take the form of speech, or of a multipage report summarizing financial results.

Among the key benefits of AI in the banking sector, the report highlights three elements:

Reduced costs by shifting tasks from humans to AI, speeding up response time, keeping humans apprised of latest regulatory changes, and save time by preparing reports. The Bank of New York Mellon Corp has already developed and deployed hundreds of automated computer programs. These bots were created to carry out repetitive tasks ranging from automated programs to respond to data requests from external auditors, to systems that correct formatting and data mistakes in requests for dollar funds transfers.

Increased revenue, improved employee effectiveness and enhanced customer experience through targeted emails and other offers, the use of speech analytics to quickly identify cases needing human attention, by allowing employees to focus on highest value test and by increasing productivity of sales reps. Last year, Stockholm-based Nordea introduced virtual employees that perform repetitive tasks faster and more efficiently than humans. The bank also partnered with Estonian AI startup Feelingstream to use the company’s technology to improve customer service. Feelingstream’s AI solution analyzes and categorizes messages sent by customers so that they can be forwarded automatically to the right person or unit for further processing.

Applications of AI in banking

While a lot has been said in the media about AI in banking, relatively few banks have actually begun production or even full-blown research at this stage, the report notes. However, banks cannot afford to ignore AI at this stage and must formulate a strategy to deal with the opportunities it promises to them and to their competitors, it advises.

Among the possible applications of AI in banking, the report explores four specific use cases:

Analytics: AI-driven analytics test vast quantities of data to search for patterns, groupings, and correlations, and allows the industry to move from merely descriptive to predictive, near real-time analysis. Machine learning can improve processes such as risk modeling, biometric identification, fraud detection, or credit underwriting.

Chatbots: A chatbot is a service powered by algorithms that interacts with a customer in a human-like manner.

Bank of America has developed an AI-enabled chatbot, Erica, that provides financial guidance for the bank’s clients through voice and text messages. Wells Fargo began piloting an AI-driven chatbot through the Facebook Messenger platform in April 2017.

Meanwhile, SoftBank’s humanoid robot Pepper is capable of recognizing the principal human emotions and adapting his behavior to the mood of his interlocutor. Over 2,000 companies around the world have adopted Pepper as an assistant to welcome, inform and guide visitors in an innovative way, the firm claims.

Robotic process automation (RPA): RPA uses a number of techniques to replicate routine human activities automatically, repeatedly and more accurately. These receive inputs (whether on paper or digitally), examine those inputs, apply a rule to them, and then send the output forward to the next step in the process.

JPMorgan has invested in such as a technology. Called COiN, the platform analyzes legal documents and extracts important data points and clauses much quicker than it would take a human.

Report generation: NLG can turn data into prose. These can write reports and summaries by synthesizing large amounts of structured data and putting them into a prose narrative that highlights the key points.

An example is the Norwegian News Agency (NTB) which started working on a project to generate automated football coverage back in 2015. The automated news production platform was officially launched in 2016 and is now supervised by a team of journalists. The tech has proved to be 99% reliable.