Malware, cryptocurrency mining, ransomware and drive-by download attacks are the top four cyberthreats in Asia Pacific (APAC), according to a new report by Microsoft.

Released last month, the 24th edition of the Microsoft Security Intelligence Report (SIR) suggests that while businesses are increasingly capitalizing on the latest security intelligence and protections to stay ahead in the evolving cybersecurity landscape, APAC continues to be an attractive region for cybercriminals with cryptocurrency mining, ransomware, malware and drive-by download attacks being more frequent in the region than in the rest of the world.

“Undoubtedly, cybersecurity is one of the most pressing issues for organizations today,” said Eric Lam, director of Microsoft Asia’s cybersecurity solutions group.

“As cyberattacks continue to increase in frequency and sophistication, understanding prevalent cyberthreats and how to limit their impact has become an imperative.”

According to a separate study by the Center for Strategic and International Studies (CSIS), in partnership with McAfee, close to US$600 billion, or nearly 1% of the global GDP, is lost to cybercrime each year.

The Microsoft research found that cybercriminals are increasingly turning to cryptocurrency mining malware, which allows them to use victims’ computers and leverage their processing power to mine cryptocurrencies.

One driver to the overall rising traction for cryptocurrency mining malware attacks is the availability of the wide availability of coin mining software, which cybercriminals repackage as malware to deliver to unsuspecting users’ computers, according to Microsoft.

Ransomware is another popular cyberthreat in APAC, which consists in locking a victim’s computer, typically by encryption, and demanding payment before the ransomed data is decrypted and access returned to the victim.

Though ransomware is declining worldwide, dropping by 73%, it remains an important threat in APAC with the region registering an encounter rate of 40% more than the global average.

In particular, Indonesia, Vietnam and India had the highest ransomware encounter rate in APAC, while Japan, Australia and New Zealand had the lowest rate.

A drive-by download attack refers to when attackers exploit vulnerabilities in webpages to direct users to compromised sites that can secretly infect users even when they do not attempt to download anything.

The highest concentration of drive-by download pages in APAC were in Taiwan, Malaysia and Indonesia, and the lowest, New Zealand, Japan and South Korea, the research found.

Japan, Australia and New Zealand had the lowest rates, which correlates with these locations’ mature cybersecurity infrastructures and well-established programs for protecting infrastructure and communicating with their citizens about basic cybersecurity best practices. 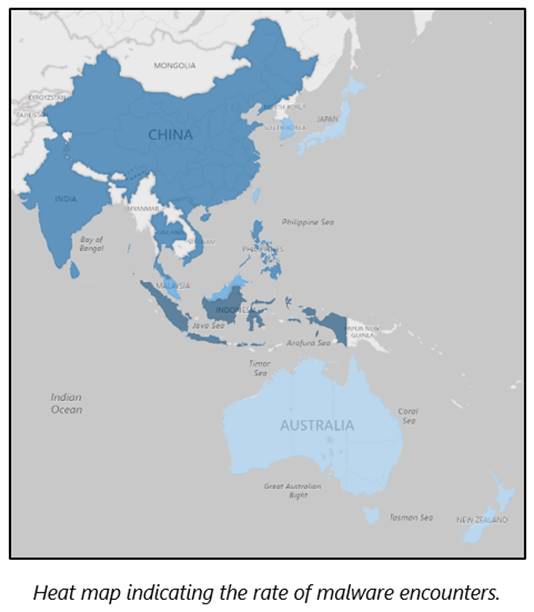 The firm also found that software supply chain attacks are an emerging trend. One supply chain tactic used by attackers is to incorporate a compromised component into a legitimate application or update package, which then is distributed to the users via the software publisher.

Adoption of Facial Recognition for eKYC on the Rise in Asia