With a population of over 250 million, consistent economic growth and high mobile phone penetration, Indonesia has emerged as one of Southeast Asia’s most promising markets for fintech disruption.

The World Economic Forum predicts that by 2020, Indonesia will become one of the biggest digital markets in the region, and with the country’s large population of unbanked (80% according to the World Bank), Indonesia is perceived as fertile ground of digital finance.

Like other similar markets, Indonesia has historically been relatively low on banking penetration. But unlike them, one of its key particularities (and challenges) is that the country is the world’s largest archipelago.

“The size and the nature of the country simply do not allow traditional financial systems to scale and cover everything,” Piotr Jakubowski, CMO of Indonesian ride-hailing firm Go-Jek, told Inc42.

“For example, one of the state banks in Indonesia has actually transformed small boats into branches that can reach consumers in even the most remote areas.

“By breaking down the barriers of location, the emerging players provide an opportunity to this large population which doesn’t has access to banks to join the digital economy and drive its growth.”

While banks themselves have proven to be innovative, this hasn’t been enough to bring the millions of unbanked people into the formal, conventional financial system.

C88 Group, which owns and operates several brands in the Philippines and Indonesia, is one of the startups that are transforming the consumer banking area by bringing financial and insurance products onto an online platform.

Investree, one of the leading peer-to-peer lending platforms in Indonesia, is filling in the void in lending space and providing individuals and businesses with a platform where they connect with investors willing to lend them money. As of June 2017, the startup had successfully disbursed US$11 million worth of loans, 17.5% average rate of return to investors, and zero default.

CredoLab, a startup headquartered in Singapore, has developed a credit scoring mobile app called CredoApp that evaluates data points from a client’s phone and produces a credit score in under two minutes. The solution improves the availability of credit to those with little to no banking history, and allows lenders to reduce their cost of risk and increase their approval rate.

The company partners with lenders across Southeast Asia to integrate its digital scorecard into their existing credit scoring infrastructure and allow these financial institutions to access untapped markets.

“For the underbanked populations of Asia’s emerging markets, such as Indonesia, the Philippines, Malaysia, Thailand, Vietnam and Myanmar, the access to a credit score without an existing credit or collateral history greatly expands their economic opportunities, by giving them access to funds from microfinance institutions and commercial lenders,” Peter Barcak, CEO and co-founder of CredoLab, told the Singapore Business Review.

“Our solutions promote financial inclusion by enabling lenders to focus on previously unbanked populations with an extremely high degree of control over credit risk.”

Indonesian banks warm up to fintech 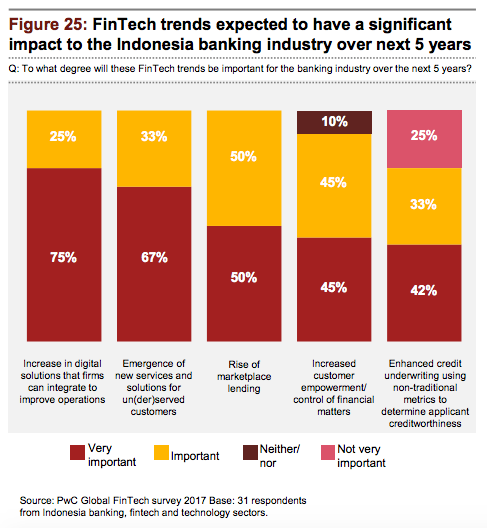 For Indonesian bankers, fintech is expected to have a significant impact on the sector. Responses to the emerging trend have varied from proactive investment in, or partnering with fintech companies, to developing their own in-house solutions.

“Fintechs can be friends if banks adapt—be that by organic digital transformations or by acquiring, funding or collaborating with fintechs to accelerate access to the market and deliver new services and products,” Liew Nam Soon, ASEAN (Association of South East Asian Nations) managing partner for financial services at EY, told Bloomberg.

“Indonesian banks like Mandiri and Bank Central Asia (BCA) are already doing so either through collaboration or funding.”

“This is a win-win for both as banks can provide funding, infrastructure, established customer base, experienced risk management and mentoring, while fintechs can offer the fast-paced technology to bring true innovation to the table.”

In more developed markets, banks and financial institutions are already heavily investing and/or partnering with fintech startups to help them keep up with the digital revolution that’s been undergoing.

Unlike startups, banks are unable to match the speed and agility that fintech startups are capable of providing. Partnering with fintechs allows them to innovate and grow at a much faster rate.

An example is Creamfinance, a European startup that specializes in smart data to provide “smart loans” to consumers in a rapid manner. In March, banking group Capitec, a leading player in South Africa in the microlending industry, acquired a 40% stake in the online lending startup. Creamfinance’s technology could help the bank grow and meet consumer loan demands more quickly and efficiently.

In Indonesia, the large unbanked population represents an untapped opportunity for financial institutions, but the high smartphone penetration rate unveils a channel through which this population can be easily reached.

Mobile payment through apps provided by banks or telecommunications companies remain the most popular ones in Indonesia. An example is TCash from Telkomsel, a local mobile phone network operator, which is the biggest telco e-wallet service in Indonesia.

According to IDG, out of the fintech services that are being used in Indonesia, over 81% are owned or run by banks and financial institutions. Only 10% of users are using non-bank related fintech products with Doku being by far the most popular one in Indonesia.

Founded in 2007, Doku is one of the oldest payments startups in the country, and has largely laid the groundwork for Indonesia’s current fintech landscape. Doku’s network counts about 22,000 merchants and 1.4 million e-wallet users.

But other unexpected players are entering the mobile payments space as well. Go-Jek, a ride-hailing startup and Indonesia’s first official unicorn, launched its digital wallet Go-Pay in late-2015, leveraging its extensive networks of drivers and user base. Go-Jek’s acquisition of payments startup PonselPay in 2016, which holds an e-money license from Bank Indonesia, allowed the startup to strengthen its Go-Pay system.

Alibaba Group affiliate Ant Financial Services unveiled in April that it will be entering the Indonesian mobile payments market through a joint-venture with domestic digital company Emtek. The strategy here is to launch a new payments platform on BBM, Indonesia’s most commonly used messenger application and a subsidiary of Emtek, and leverage the messaging app’s user base of over 63 million monthly active users.