Fintech Takes Off In Indonesia

Investment in fintech startups is set to hit a record hit in 2017 with an estimated 50 deals to close this year, according to an analysis by CB Insights. 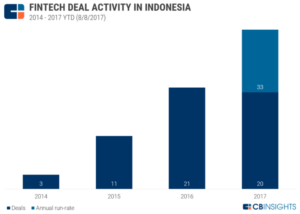 While the overall industry is gaining traction from both consumers and investors, several categories are particularly raising in popularity.

With 80% of the Indonesian population without a formal bank account, peer-to-peer lending has emerged as a popular way to get access to credit, helping banks, simultaneously, bridge the gap in consumer and small and medium-sized enterprise (SME) lending.

Popular platforms in Indonesia include Amartha, a peer-to-peer lending platform for businesses, UangTeman, a platform for short-term microcredit to Indonesian consumers, and Investree, which claims to have distributed close to US$20 million in loans to 700 SMEs.

SMEs represent over 99% of Indonesia’s total number of enterprises. There are 41 million small economic units in the overall economy, 60,000 medium-sized enterprises and more than 2,000 large enterprises, according to the Bali International Consulting Group.

Fintech startups Moka, Pawoon and Cashlez, are looking to bring these businesses to the digital era, providing them with point-of-sale software and/or hardware, cash flow management, and apps to monitor business transactions.

With a population of over 250 million and rapidly growing Internet adoption, the Indonesian e-commerce industry has flourished. Current projections say the sector could reach US$130 billion by 2020.

Numerous platforms have emerged to tap into this trend. Cicil, for instance, offers a financing platform targeted at college students to provide installment loans for items such as smartphone and laptops. Akulaku provides an installment shopping mall, and FinAccel is offering credit for online shopping without credit card on 30-day, three, six and 12-month installment.

These comparison platforms not only help consumers navigate through the multitude of financial products available out there, they also provide banks with a great marketing tool that has the ability to reach a large pool of prospects.

And banks around the world are quickly warming up to fintech, recognizing the need to adapt to the digital revolution, live up to customers’ evolving expectations and sustaining their current market positions.

According to McKinsey and Company, the structure of the fintech industry is changing and a new spirit of cooperation between fintechs and incumbents is developing.

The firm estimates that the share of fintechs with B2B offerings has increased from 34% of those launched in 2011, to 47% of 2015’s startups.

Fintech startup CredoLab is already partnered with several banks and financial services providers across the Southeast Asian region to integrate its digital scorecard into their existing infrastructure.

CredoLab has developed a credit scoring mobile app called CredoApp that uses data points from one’s cellphone to produce a credit score in under two minutes. This alternative method of determining one’s credit worthiness allows partner banks to start serving the large pool of unbanked people, a segment that represents a tremendous, yet untapped, market opportunity.

On November 22 and 23, the BankTech Asia event in Jakarta will bring together thought leaders and decision makers to discuss the future of the Indonesian banking landscape. Speakers will include representatives from Vietnam’s first digital banking platform Timo, Malaysia’s Maybank, IASA, and more. 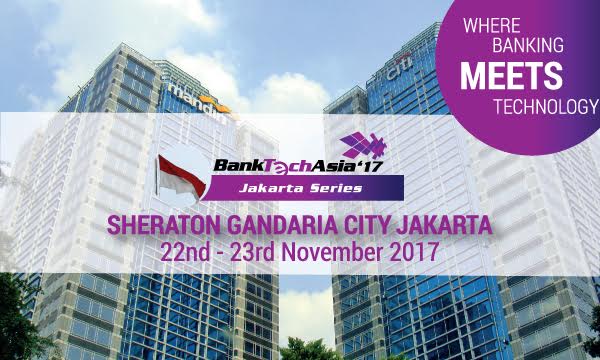 How 4 Indonesian Banks are Collaborating with Fintech Startups