Revolut to Launch in Singapore

Revolut, a London-headquartered neo-bank, is about to launch in Singapore as the company started letting users join the waiting list to get early access. Revolut, which currently serves some 800,000 customers across Europe, announced plans to expand to the US, Australia, Hong Kong and Singapore earlier this year. 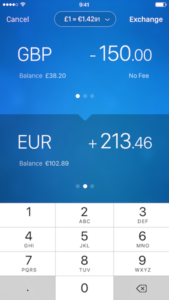 The banking app enables users to instantly send free money transfers in 26 currencies to banks around the globe; spend fee-free in 120 currencies with a contactless Revolut payment card; and exchange currencies at interbank rates in the app.

Over time, Revolut has been adding new features including personal IBANs, a credit feature, business accounts and travel insurance.

The startup supports spending and ATM withdrawals in 90 currencies and sending in 23 currencies directly from the mobile app.

In July 2017, it raised US$66 million in funding from investors including Index Ventures, Balderton Capital and Ribbit Capital to fund its global expansion plans and add support for cryptocurrencies.

“Adding cryptocurrencies and the ability to buy and sell them is a big step forward for a financial organization,” founder and CEO Nikolay Storonsky, an ex-Credit Suisse Group trader, told Bloomberg in an interview. “Big banks are looking at us and seeing what we’re doing, for future things they want to add to their product pipeline, but they’re very slow.”

Revolut raised a total of US$86 million in funding since its inception. The last fundraising was an equity crowdfunding campaign that reached its goal of US$5.3 million in less than 24 hours.

Storonsky said the Asia and North America growth plan will come “in parallel to expanding in Europe. These are big markets, there’s huge demand for our products.”

As of July 2017, Revolut is available to residents of EU member states and some of its members’ dependency territories and in Switzerland. The company aims to be available worldwide in the future.

Recently they started also started marketing in German and Austria.

Revolut is part of the wave of startups looking to disrupt the banking industry by providing cheaper products and allowing customers to manage their finances entirely online and through digital channels.

Notable challenger banks in Europe include N26 from Germany, as well as Atom, Starling and Monzo from the UK.

Neo-banks and challenger banks raised more than US$300 million in investment in 2016.

Featured image: Revolut team. This is an updated article post from October 2017