Payoneer brings in one place a number of payment options and allows online marketplaces and global companies to transfer fund and pay service providers located in various parts of the world in a faster manner, at lower fees and with greater flexibility.

This New York-based financial services firm provides businesses with an all-in-one solution that allows them to send out payments to other companies and working professionals from all around the world more efficiently and at a cheaper cost. Payouts can be done via prepaid debit card, bank transfers, checks and local e-wallets to 200 countries and in 150 currencies.

Through a single API integration, these companies can support sending payments almost instantly around the world to trading partners, suppliers, merchants and manufacturers. 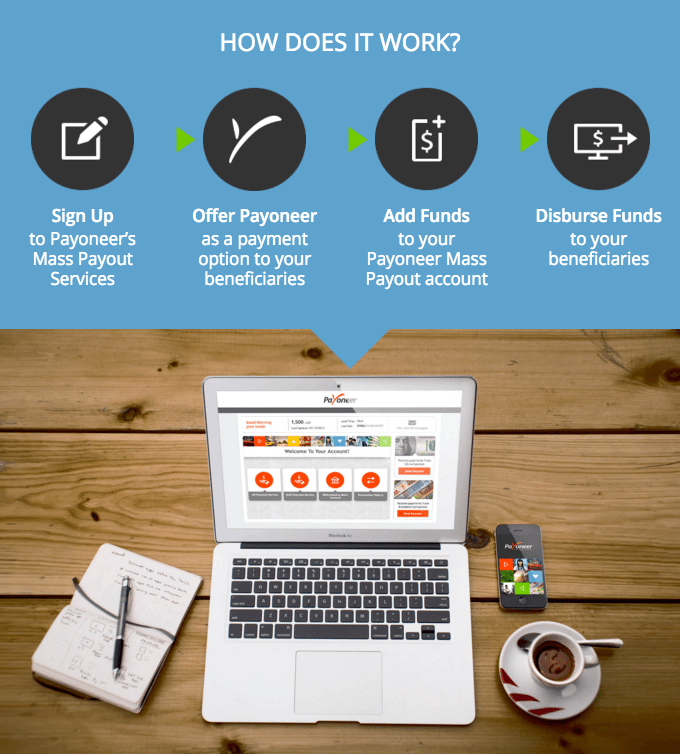 Payoneer: How it works, via https://www.payoneer.com

Businesses simply need to sign up to Payoneer’s Mass Payout Services, offer Payonees as a payment option, add funds to your account, and then send out these funds to your beneficiaries.

Payoneer offers different packages depending on how much your company is paying out per month.

The many benefits of using Payoneer, the company claims, are the ability for businesses to grow globally, to reduce costs by up to 90% as well as the ability to enjoy maximum flexibility with the various payments options available in each country.

While the large number of payout methods provided by Payoneer may seem convenient, the fees associated to its prepaid debit card – which operates on the MasterCard payment network – can be unattractive to many.

In Vietnam for instance, withdrawal limit varies depending on banks. If you withdraw funds at a HSBC ATM for example, you will be limited to 10 million VND (~US$450) per transaction, but you will be charged 100,000 VND in fees (~US$4.5), so a 1% fee.

In May last year, Payoneer opened a new office in Hong Kong seeking to tap into the Asia-Pacific market.

“It should come as no surprise that countries in Asia play a large role in driving the growth and expansion of Payoneer,” Patrick de Courcy, Head of Asia Pacific at Payoneer, wrote in a blog post announcing the launch.

“We’ve been busy rolling out our brand ambassador program across Asia, hosting popular events in Bangladesh, Pakistan, Korea, Japan, the Philippines and Vietnam. We launched our partnership with Bank Asia in Bangladesh. We now have a team in Shanghai working with several thousand cross-border e-commerce sellers to grow their business.”

The firm has plans to open its next office in Japan.

Founded in 2005 with US $2 million in seed funding from then-CEO Yuval Tal and other private investors, Payoneer is a registered Member Service Provider of MasterCard worldwide. The firm targets e-commerce marketplaces with merchant sellers worldwide, affiliate and ad networks, freelance marketplaces, global vacation marketplaces… Overall, any online business that needs to manage global payouts on a massive scale.

“At Payoneer, our goal is to empower our customers to grow their businesses by enabling them to pay and get paid as easily globally as they do locally,” Scott Galit, CEO of Payoneer, said in a statement.

“We see every day how technology and the Internet are creating exciting new business opportunities all over the world. We see millions of entrepreneurs from over 200 countries and territories – professionals, small businesses and digital platforms – who are actively building global businesses in this new world of opportunity. And every day we see the challenges these businesses face in getting paid and making payments for cross-border trade.”

Payoneer raised its latest round of funding in August last year. The US$50 million series E funding round was led by Wellington Management Company and included participation of Susquehanna Growth Equity, LLC, an existing shareholder. Other existing Payoneer investors include Carmel Ventures, Greylock Partners, Nyca Partners and Ping An Group.