The Bank of Thailand (BOT) is looking to boost the use of electronic and e-payment as the governor believes that these methods will be crucial to the competitiveness of the Thai economy since they will reduce transaction cost while boosting good governance.

E-payment can also be used by the government to provide welfare to low-income groups more efficiently and with transparency, according to BOT governor Veerathai Santiprabhob. 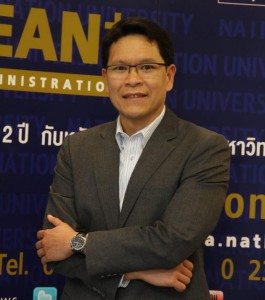 Veerathai Santiprabhob, Governor of the Bank of Thailand

A report from the Nation suggests that Thailand’s central bank will announce today a new three-year strategic plan to boost the sector.

“There will be many new players [in the banking system due to the advent of new technology],” Santiprabhob, a Harvard-educated former IMF economist, said during an interview with Nation TV Timeline.

“These are potential game-changers since they will be able to do cross-border transactions. Bitcoin and the technology behind it, blockchain, are one example.”

Fintech is considered as a crucial factor that will affect the regulatory framework and governance of bank and financial institutions in the coming years. The governor said BOT will closely monitor fintech developments and prepare measures to cope with the impact of these new financial technologies.

Santiprabhob indicated that Thailand would soon have a new payment legislation in place. The proposed legislation has already been approved by the Cabinet and is awaiting enactment by the National Legislative Assembly.

During a speech at the Thailand Focus 2015 in December last year, Santiprabhob indicated that Thailand’s Financial Sector Master Plan Phase III will “aim for a competitive, inclusive, connected and sustainable financial sector.”

“Five years from now, I foresee that the Thai financial landscape will look different from today, with more digital banking and electronic payment transactions, and increased competition from nonbanks and foreign players,” Santiprabhob told the audience.

The governor indicated that he expected to see emerge a number of financial technology startups looking to tap into segments such as data analytics, crowdfunding, and product or price comparison services.

“Ultimately, competition will increase financial access, and lower transaction costs to the economy as a whole,” Santiprabhob said.

“The Bank of Thailand will focus on the development of infrastructures and standards, while ensuring that rules and regulations are clear and supportive of innovation and efficiency. The new Payment Systems Act will unify all relevant regulations currently specified under different laws and enforced by various different agencies.”

Santiprabhob further said that BOT will support the government’s initiatives to promote nation-wide electronic payment system, including, for instance, “the development of ‘Any ID’ payment infrastructure, and the promotion of debit card usage for payment and transfer of welfare benefits.”

A report from TechSauce suggests that the Thai fintech startup ecosystem is still in its infancy with only 27 startups as of December 2015.

The majority of these startups are tackling the payments and retail investment sectors, and Thailand is still missing players in the lending, remittance, consumer banking, financial research, banking infrastructure and institution investment segments. 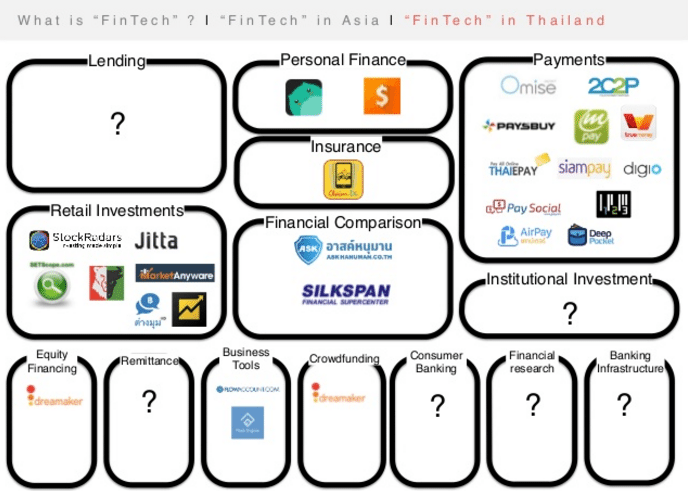 In personal finance, Piggipo is an app that allows users to manage their credit cards’ transactions and monitor their expenses.

Thailand’s domestic startup scene is still small, with e-commerce, game and e-logistics being the three sectors that have attracted the most deals so far. Only seven Thai fintech startups raised funding in 2015: StockRadars, Piggipo, PeakEngine, Flowaccount, 2C2P, Omise and Anipipo.

With an aim to boost startup funding, the Siam Commercial Bank (SCB) has announced earlier this year its first venture capital fund. The US$50 million fund will be targeted at startups raising Series A or higher stage capital.

SCB is awaiting approval from BOT and plans to launch the fund in the first quarter of the year, reported DealStreetAsia.