Blockchain in Capital Markets: Still Many Hurdles to Overcome, Says a New Report

In a new report entitled ‘Blockchain in Capital Markets: The Prize and the Journey,’ Euroclear and Oliver Wyman explore the merits of using blockchain technology in the capital markets, a technology that could potentially provide a new approach to data management and be a solution to many of the inefficiencies afflicting capital markets.

According to the report, the current methods for storing and agreeing datasets of financial obligations and ownership are highly complex, utilize fragmented IT and data architectures and suffer from a lack of common standards.

Hence, the firms ask whether blockchain technology could be “the structural change the market needs.”

“The conceptual case for distributed ledger technology is compelling,” the document reads. “It is a genuinely new and more efficient way to organize financial transaction data.”

Blockchain-based capital markets systems have many potential benefits across pre-trade, trade, post-trade and securities servicing, and these benefits include reduced credit exposures, reduced margin and collateral requirements, simpler KYC/AML, greater transparency, and a higher lever of automation and desintermediation. 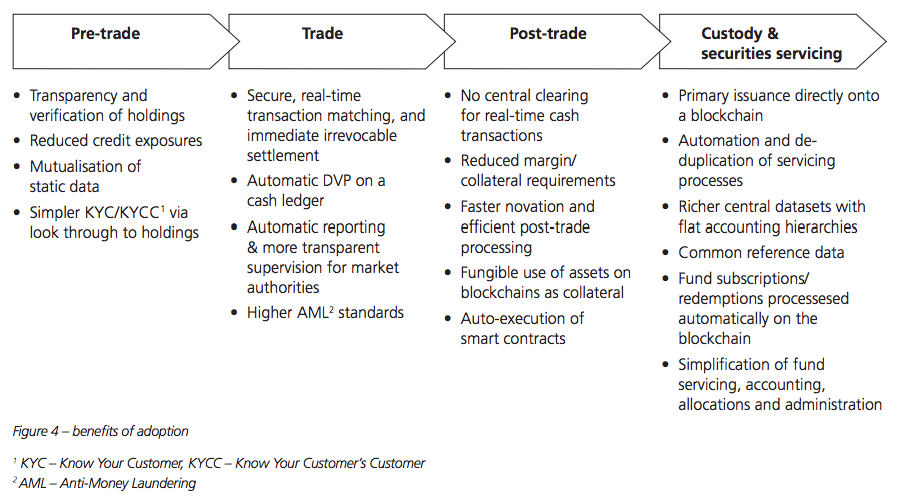 So it would seem that the technology holds many promises in allowing capital markets to work better, faster and more transparently, and yet, in order for the technology to reach widespread adoption, blockchain will need to clear a number of hurdles:

Scaling the technology: Blockchain remains nascent although lots of developments have been made recently. The current standard of technology remains behind the levels required to support adoption in capital markets. Blockchain will need to prove that it can handle much larger datasets and support very high standards in terms of security, robustness and performance.

Regulation and legislation: Innovations in financial markets require the explicit approval from regulators well ahead of time. In the case of blockchain, new regulatory principles may be needed where the technology becomes an integral part of the market infrastructure, and where consensus protocols are run through an international network of participants. A considerable number of aspects of law may need to be reinterpreted or changed through primary legislation, the report suggests.

A robust cash ledger: An interoperable cash ledger would allow fiat currency to be recorded on a blockchain. However, the technology would require some intermediary steps.

Common standards and governance: Industry consensus will be required on certain design points and there will need to be clear agreement on how blockchains will be managed and improved once they are live.

Operational risks of transition: A significant amount of work will need to be done to ensure that operational risks, for instance by running parallel infrastructures whilst disruptive solutions grow, are minimized.

Managing anonymity: Anonymity is a critical requirement for many processes in capital markets and while cryptography could do well in protecting anonymity, it will require meticulous key management records. Additionally, the ability to reveal selective information to counterparties such as credit assurance, for example, makes it difficult to prevent errors that could result in major data breaches. Moreover, regulators and law enforcements are likely to require full view of unanonymized data in a ledger to perform surveillance and maintain AML/KYC processes.

Oliver Wyman and Euroclear suggest that widespread adoption of blockchain technology in capital markets won’t be reached before 2020, and before then, the technology will need to go through a number of stages.

Today, bitcoin is still the only use case for blockchain technology, but in the next five years, the technology will be used for niche applications for bold transformations of small markets. Then, progressively, blockchain will gain wide industry traction with initial adoption in thin parts of industry-wide value chain.

“After a 3 to 5 year period, it is possible that substantial applications will start to be used by the majority of large players in an important market,” the document reads.

“Long-term mass adoption across multiple markets, processes and asset classes is only achievable if the following elements are present: extremely robust technology offerings; deep familiarity with, and great confidence in, technology solutions; and massive investment of time and resources by a large number of market participants in both commonly agreeing the standards to be used by every participant, and in implementing the technology into existing systems front-to-back.

“Given the adoption paths of similarly enormous endeavors (and we would argue the scope of such a radical transformation could easily dwarf the ambition level of T2S in Europe), this is unlikely to hit the planning boards before 2020, and deployment will probably be many years after that.” 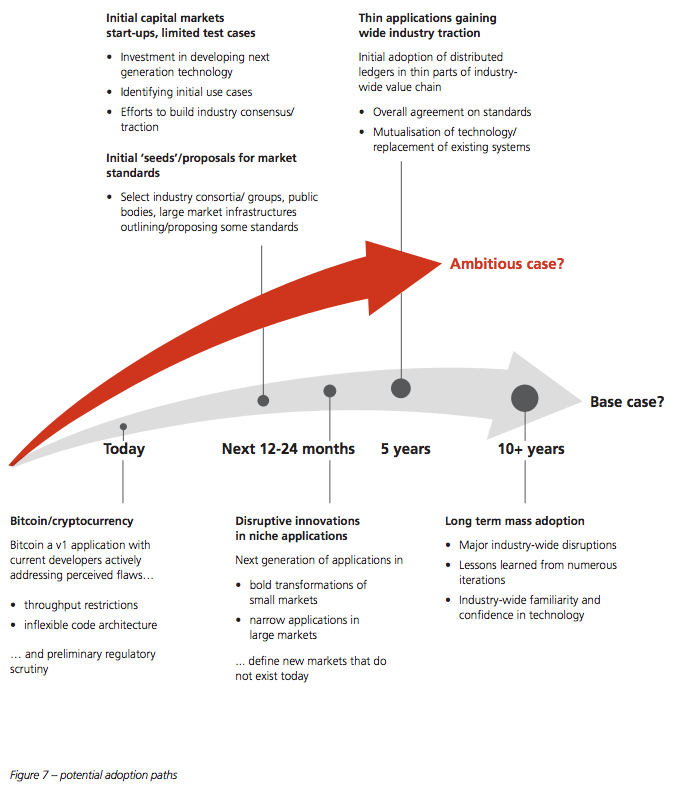 Blockchain To Cause A ‘Profound Technological Shift’ In Banking, Insurance, And Beyond