Holding the promise of making investing easy, affordable and accessible to the greatest possible number of people, robo-advisors have already caused a stir in the UK and the US and are now winning market share in Asia.

Infinity Partners, a high-end financial advisory outfit based in Singapore, claimed in September last year it was about to launch the first robo-advisor available in the country. The group could well be outstripped by Smartly, another robo-advisor expected to launch in Singapore in July this year.

Smartly, which aims to simplify and educate users about investing, is building what the company claims to be, a next-generation robo-advisory platform targeted at the Southeast Asian millennial market.

“The Singapore investment market has been booming, however, the millennials, whom are the bedrock of our future, are not investing,” Keir Veskiväli, the founder and CEO of Smartly, told Fintechnews in an email communication.

In the region, the robo-advisor space remains relatively new, and yet, the company holds the bold ambition of being the first automated platform to launch in Singapore and targets a total of S$5 million worth of asset under management by the end of 2016.

Technically speaking, Smartly will provide users with a customized globally diversified investment portfolio of exchange-traded funds based on goals initially stipulated. The cost? Only 1% per year if you invest under $10,000, 0.7% per year for a minimum balance of $10,000, and 0.5% for $100,000 and over.

Smartly won’t charge any trading commission, and the fees mentioned above include risk assessment, portfolio recommendation, unlimited deposits and withdrawals, and 24/7 monitoring of your portfolio.

The platform aims to allow the average individual to build wealth starting with as little as $50, and promises to be much more than an algorithm-based automated platform. In fact, it wishes to differentiate itself by providing users with financial education and greater transparency. 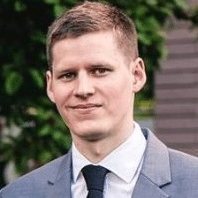 Keir Veskivali, Founder and CEO of Smartly, via Linkedin.

Veskiväli, an Estonian native entrepreneur, experienced the struggle of being a beginner investor about a year ago, when he began considering putting money aside for rainy days and retirement. The lack of transparency in fee structures and the poor user experience were the most striking issues he encountered, Veskiväli told Fintechnews.

“I started to write out all the problems I had and decided to start building a platform that is globally accessible, transparent, charges low fees and lets people save up money by investing it regularly in small amounts,” he said.

And then was born Smartly.

This young Singaporean startup is currently supported by a team of five people working towards building an automated platform that requires minimum financial knowledge while providing full transparency. Average users should be enable to invest globally, with relatively small amounts and minimized fees, Veskiväli said.

“Most people have always viewed investing as something complex and risky,” he said. “There is limited transparency in the majority of investment products, coupled with high management fees charged by asset managers.”

But the path to bringing investing to the masses also requires a significant amount of work in terms of financial education. Financial literacy is currently weak among most of the population, which leaves the average investor with little investment opportunities that meet their investment needs, Veskiväli said.

To fill the gap, Smartly is developing in parallel with the investment platform, an educational platform to educate users on the basics of investing through a series of animated videos.

The series, Veskiväli said, will “complement our investment platform by simplifying, as well as giving clarity and confidence to our users.”

Smartly will start beta testing in the coming months and invites anyone interested in participating to reach out.