Currency Project Initiative Q Is All Over Social Media– Be Careful, Your Data or Reputation are at Risk!

A new currency project called Initiative Q has been all over social media these past weeks as promoters are pushing to enroll more and more people to the scheme as part of a multi-level marketing campaign. But critics are warning about the many red flags hinting at a potential scam.

Created by “ex-Paypal guys,” Initiative Q claims it is “building the payment system of the future” which will integrate “the best technological improvements that have been made in the payment industry over the last few decades” but development of the network is not scheduled to start until mid-2019.

The project comprises a private currency called Q, which the company has been giving away for free. But to get into the list, you need an invitation and the company behind it has successfully instilled a sense of urgency to get people to join in.

On the project’s website, a live ticker even shows the decreasing value of coin allocations as more people sign up. 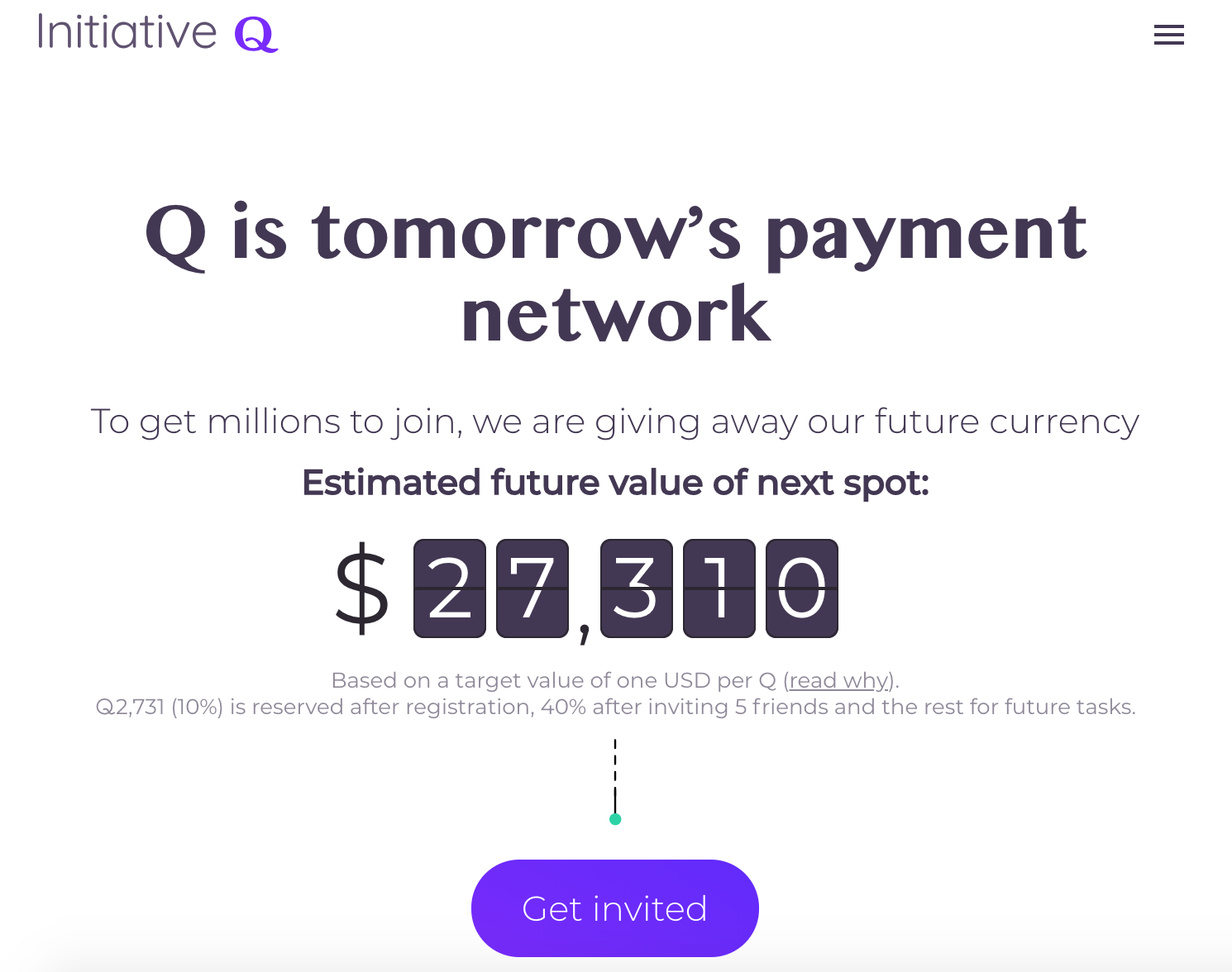 The Q currency is currently worthless but developers claim it will be used as a universal currency in the future and its worth will start off as US$1 for 1Q. With two trillion coins to be issued, this would make the currency worth a total of US$2 trillion, they say.

The scheme requires hundreds of millions of members to meet its objective, which is supposedly why they’re offering millions of people to sign up and get Q tokens for “free” initially.

“Initiative Q will succeed only if many people join,” reads an email sent to participants. “The more people invite their friends, the greater the likelihood of reaching the goal of each Q being worth around one US dollar.”

To join, you have to be referred by an existing member, and then, once you’re registered by submitting your name and email address, you can invite five other people for even more of the currency.

A typical multi-level marketing MLM binary tree structure. The blue individual will receive compensation from the sales of the downline red members. Via Wikipedia

Initiative Q says there are more opportunities to earn more Q currency by completing a number of tasks including installing the Q application, adding information and making unspecified purchases.

While Initiative Q doesn’t require people to hand over any cash to join the scheme, several industry observers have warned that it could be a scam. Some have compared it to multi-level marketing without the fee: unless and until enough people sign up, the currency is valueless, noting several potential problems such as no clear security measures, unclear transaction/exchange costs, and potential for market manipulation by the largest holders of currency.

Additionally, the Q currency is not a form of cryptocurrency although it has been dubbed as the new bitcoin with developers promising a “get-richer-but-slowly” result. (Fomo)

Still its interesting to see that with greed you can get so many high qualified email addresses, some of this subscribers clearly forgot some lessons from first semester in finance university: “potential return always comes with risk” , in the case of Q the risk might be reputational risk or a bit brother data risk.

Your Data is at Risk! Scammers might use it

Ben Yearsley, director of Shore Financial Planning, warned  also against the risk of scamming with this scheme.

“The quickest way to lose money is to invest in get-rich-quick schemes that look too good to be true and often are,” Yearsley told the Mail Online. “If it feels wrong, it probably is! For most investors, sticking to mainstream investments is the best strategy.”

Yet, more than three million people have registered to the initiative in the last three months.

But according to cryptocurrency expert David Gerard, author of Attack Of The 50 Foot Blockchain, the real concern with Initiative Q is what might happen to participants’ personal data.

“The big worry is the big pile of email addresses — it’s a list of people who think you can get rich for free,” Gerard told News.com.au. “That list would be worth a fortune to scammers. Frauds love lists like that. Initiative Q’s privacy policy is very good. But what if they get sold for parts? Or what if they get hacked? How good is their security?”

“This sort of dangerous list is why the EU put the GDPR (General Data Protection Regulation) into place,” he added.

Initiative Q has some high-profile names behind it: its founder, Saar Wilf, is an Israeli entrepreneur who ran a first payments startup in 1997, and later founded Fraud Sciences which was eventually acquired by PayPal, and Lawrence H. White, a Cato Institute economist and professor of monetary theory and policy at George Mason University, who developed the Q economic and monetary models.

But this isn’t the first time big names and celebrities are tied to questionable digital currency projects. Steven Seagal, Paris Hilton, and Floyd Mayweather, have all vouched for cryptocurrency projects and financial regulators around the world, including the US and the UK, are warning that cryptocurrency scams using celebrity images are on the rise.

Innovfest Unbound Returns To Singapore In Its Fourth Year, Expecting Biggest Turn-Out Yet