Headquartered in Hong Kong, Bitspark provides a bitcoin remittance solution and currently serves Vietnam, the Philippines and Indonesia. By signing a Master Agreement with Vitaxel Group – a firm specializing in multi-level marketing with close to 5,000 distributors based in 16 Asian countries –, Bitspark will be entering the Malaysian market soon, further expanding its business in Southeast Asia.

Committed to “provide the most effective technology to deliver the best value to our current and future customers,” Vitaxel’s CEO Ryan Leong said that the new collaboration with Bitspark – a “game-changer” – will provide his clientele with the ability to faster money transfer with greater cost savings.

With the rise of mobile banking and smartphone usage in Malaysia and other emerging Southeast Asian countries, the two companies seek to tap into the new opportunities related to reducing costs in cross border trade. 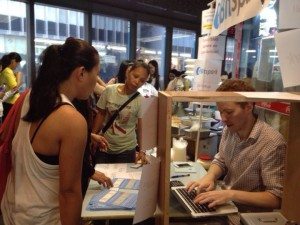 Image credit: A Bitspark shop in Hong Kong, by TechInAsia.

Founded in 2014, Bitspark specializes in bitcoin remittances with a particular focus on the Asia-Pacific region. The startup is known for pioneering the world’s first “cash-in cash-out” remittance solution that leverages bitcoin.

In Hong Kong, Bitspark has a number local stores where users can come in and hand cash money to be sent abroad. The startup said it is currently working on setting up similar stores in Vietnam and Indonesia.

Alongside the partnership with Vitaxel, Bitspark has also announced that it had been selected for the second selection round of South Korea’s K-Startup Grand Challenge 2016, a startup program conducted and financed by the government of the Republic of Korea.

Bitspark essentially provides you with a digital wallet which you can credit with money (bitcoins) and then use to send international payments. But before you’ll be granted access to all the functionalities, you will need to verify your account: this means provide, digitally, all the necessary KYC documents.

Once your identity is verified, you will be able to add fund to your account. Note that Bitspark will charge a 0.0003 BTC (US$0.20) fee when depositing bitcoins.

Then, once your account is loaded, you will be able to send money. To send a remittance to Vietnam, for instance, you will need to enter the amount in VND that you would like to send, then send the relevant amount in bitcoin to Bitspark, which will then send the money in VND to the recipient’s bank account. The transaction will cost just a couple bucks (US$2 or 3).

Bitcoin Vietnam, the country’s first and only bitcoin exchange, has been offering a similar solution since mid-2015. Called Cash2VN, the service is similar to Bitspark as it uses bitcoin for cross-border payments.

Users send bitcoins to the platform, which then are converted in the local currency and credited the recipient’s bank account. Recipients can also choose to receive the money in cash at a local pickup. Regarding the fees, Cash2VN charges a flat US$2, which is comparable to Bitspark.

The only main different is that you will not need to verify your identity to use Cash2VN, which ultimately means less hassle and quicker transactions.

Cash2VN will only request you to signup. Then, you will be able to send remittances by simply entering your name and contact info, the amount in VND you would like to send to Vietnam, the banking details of your recipient as well as his or her contact details (name and email address). 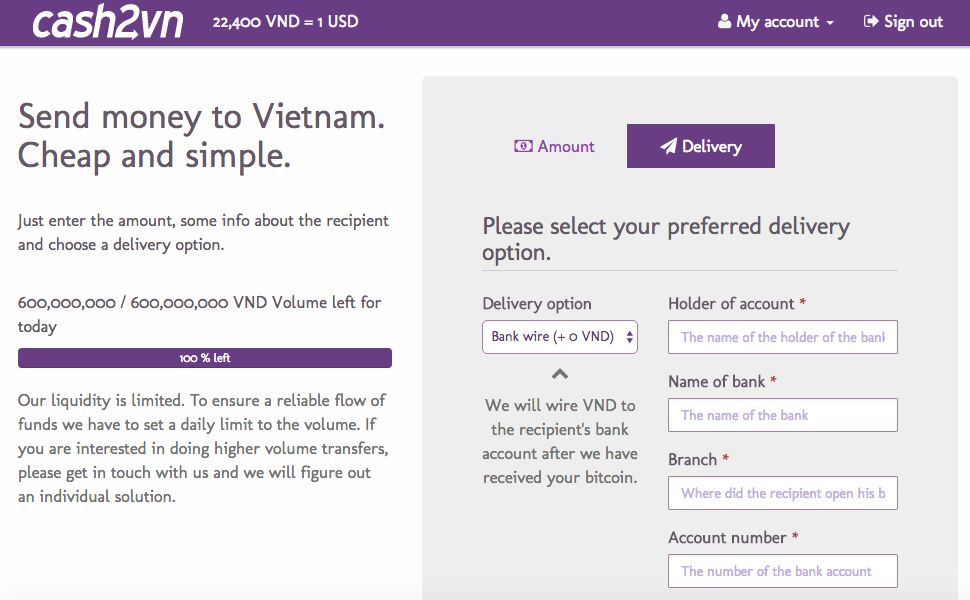 You will then be redirected to a page where you will find the bitcoin address and the relevant QR code to which you will be asked to send the corresponding amount of bitcoins.

Once the network has confirmed the bitcoin transaction, the money is sent to the recipient who is notified by email that he or she has received a remittance. In the case of a direct bank transfer, this whole process can take less than two hours.

Currently, solutions that leverage bitcoin such as Cash2VN and Bitspark are providing the fastest, cheapest and easiest way to send money to Vietnam.