India’s fintech scene is quickly transitioning into a dynamic ecosystem for startups to grow as the government and regulators are aggressively supporting the ambition of the Indian economy to become a cashless digital economy and emerge as a strong fintech contestant.

Notably, the Startup India initiative, launched by the Government of India in January 2016, has dedicated a US$1.5 billion fund to support startups.

The Reserve Bank of India (RBI), the country’s central bank, has been actively contributing to the development of fintech. RBI has been working towards creating an environment for unhindered innovations by fintech. The authority is looking to expand the reach of banking services for the unbanked and provide alternative options to the consumers.

India, which is home to about 21% of the world’s unbanked population, has been facing the tough challenge of catching up with the rest of world in terms of banking and financial services access. The country’s large population of unbanked adults combined with the surge in the surge in e-commerce and smartphone penetration, have made India a fertile ground of fintech.

Particularly, the total number of accounts has been steadily growing since October 2015. 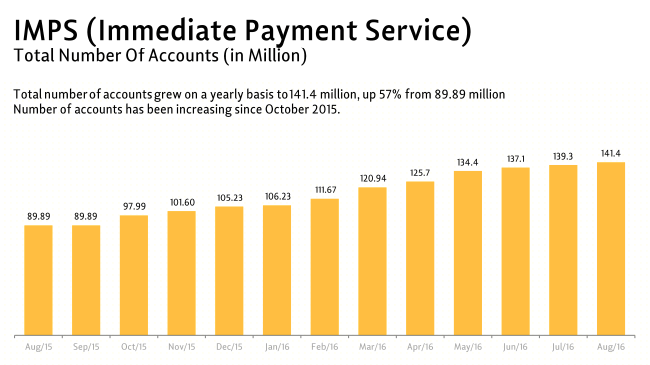 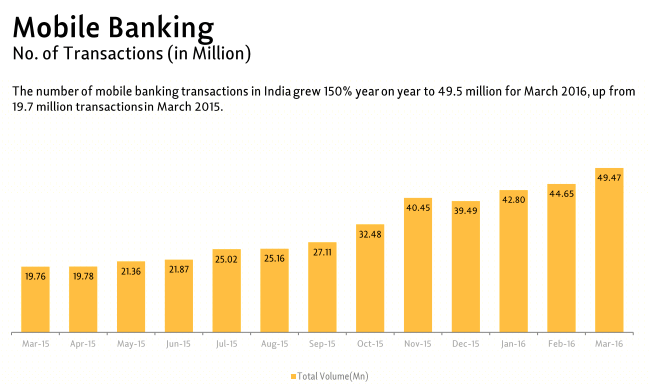 “Fintech in India has the potential to catch up with its global counterparts as the various ecosystem players come together to orchestrate a much-needed change in the industry,” said Neha Punater, a partner of KPMG in India. “We have the talent and the funding to support this change. The key for success will be the ready adoption by the big banks.”

According to a separate report by KPMG in India, the banking and financial services sector has been gearing for both acquisitions and funding-based routes to increase presence in the fintech space. For instance, Citi Bank, Barclays and Goldman Sachs have all launched fintech-focused accelerator programs.

In June, Societe Generale Global Solution Centre, a subsidiary of Societe Generale, one of the largest European financial services groups, launched Catalyst in partnership with NASSCOM 10,000 Startups. The startup accelerator program, targeted at Indian startups, aimed at creating a platform to promote collaboration and innovation for entrepreneurs.

In 2015, investors have been concentrated towards hi-tech cities, with Bengaluru witnessing eleven VC-backed investment deals of US$57 million followed by Mumbai and Gurgaon with nine and six deals respectively, according to KPMG.

But financial institutions are doing more than investing in startups. Some have partnered with fintech ventures to address demand of millennials and digital-age consumers. Notable partnerships so far include SBI’s collaboration with Ezetap to provide mobile POS devices across India. Bank of India offers a wallet from Paynimo powered by TechProcess.

A report by the NASSCOM, India counted around 400 fintech ventures with an investment of about US$420 million as of 2015. The report also estimated the fintech software and services market to grow 1.7 times by 2020, making it worth US$8 billion.

Financial Institutions Have These 3 Fears Of Artificial Intelligence