The History of Money in Cambodia and The Potential of Bitcoin

Cambodia’s monetary history can be traced back to the ancient Khmer times.

According to Michael Trané, a specialist in Khmer culture and civilization and former under-secretary at the Ministry of Culture and Fine Arts, “a lot of evidence has been found, such as copper notes, mirrors, Buddhist statues, and ceramics” that hint on the progress of ancient Khmer trade and the prosperity of the country in the Nokor Phnom era, which existed since the beginning of the history until the 6th century.

The empire had currency in circulation which was used to trade with businessmen from India, Malaysia, Iran, even Greece and the Roman Empire. Monetary notes issued for use in the Nokor Phnom era were in the form of round coins made of metal, bronze, silver and gold.

“The study of these ancient objects has informed people about the prosperity and progress of Cambodia’s ancient era, which resulted from a regime of monarchy and trade, and made people prosperous and wealthy,” Trané told the Phnom Penh Postal.

Alongside using currency, the Khmer people from ancient times would exchange products with each other, swapping their rice, corn, and beans with fish, cows, buffalo or even farmland and houses, according to His Excellency Chuch Phoeun, secretary of state from the Ministry of Culture and Fine Arts.

Coins were in continual use by Khmer people until the era of King Ang Duong, the king who led the kingdom between 1848 and 1860 before the French colonialists arrived in the mid-1860s.

During the early days of the French colonial times, Cambodian people still used their own currency. This lasted until the French developed and printed paper currency for Cambodia, Laos and Vietnam, 12 years after Cambodia became part of the French Indochina.

A branch was set up in Phnom Penh, which became the note-issuing bank of all of Indochina from February 1891 to December 1951.

In took nearly one century for modern Cambodians to recreate an independent national currency. Upon gaining full independence from the French in 1953, Cambodia started issuing the Riel. By October 1955, the piastre was completely replaced.

After the Vietnamese invasion in 1978, the riel was re-established as the Cambodian currency in April 1980. Because there was no money for it to replace and a severely disrupted economy, the central government gave away the new money to the populace in order to encourage its use. 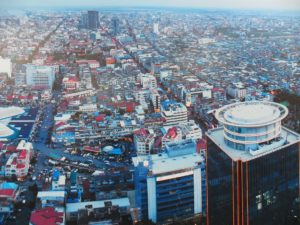 Today, the riel still remains Cambodia’s official currency; although the US dollar is Cambodia’s unofficial second currency with a 90% level of dollarization. At border towns, currencies of neighboring countries can be used. This means that there can be three currencies in circulation: the riel, the US dollar, the Thai baht or the Vietnamese dong.

Cambodia’s multi-currency system has led many industry observers to point out that the country may well be the perfect candidate for bitcoin and digital currency. Instead of its cash-dominant economy, Cambodians could adopt a completely digital currency that is global and easily transferable.

A report by the United Nations-based Better Than Cash Alliance unveiled a number of evidences supporting the benefits of transitioning from cash to digital payments.

According to the document, digital finance would lead to a US$3.7 trillion GDP boost by 2025, create 95 million new jobs across all sectors and save US$110 billion annually in leakages in emerging countries.

Cambodia’s booming financial and property sectors have resulted in a dramatic increase in the number of financial transactions, as well as the amount of money transferred into and out of the country each year, creating opportunities for money laundering, reports the Phnom Penh Post.

2 Disturbing Trends That Force Us to Consider: Are ICOs A Failure?

ICO Regulation In Asia: An Overview