Jack Ma, the founder and executive chairman of Alibaba Group, has been appointed as Malaysia’s digital economy advisor as the government looks to boost the country’s e-commerce and Internet sector, and create new opportunities for Malaysia. 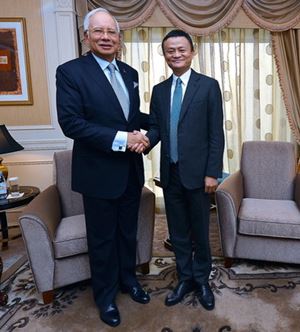 Prime minister Datuk Seri Najib Tun Razak announced the appointment of Ma on November 04 during a week long visit to China for the launch of the Alitrip Malaysia Tourism Pavilion, an e-commerce platform that seeks to attract Chinese travelers to browse Malaysia’s tourism products.

“We will be in partnership with Jack on the path and route to the future,” Najib said, as quoted by Bernama news agency. “You can see that China is the place to be. It has 300 million middle-class people, larger than (the) US population. We hope, together with Alibaba, we can make Malaysia and China more prosperous.”

In Najib’s 2017 Budget speech in October, the prime minister unveiled the country’s ambition to launch the world’s first Digital Free Zone. The initiative would “merge physical and virtual zones, with additional online and digital services to facilitate international e-commerce and invigorate Internet-based innovation.”

Through the Malaysia Digital Economy Corporation (MDEC), a government sponsored initiative to create a hi-tech business corridor in Malaysia, the country is allocating RM162 million (US$37 million) to implement programs such as an e-commerce ecosystem and Digital Maker Movement as well as Malaysia Digital Hubs.

Ma could help Malaysia in the packaging of its digital economy and help implement tools for online payments, banking, e-financing and eventually Alipay.

Alipay, a major payment platform in China affiliated with Alibaba Group, could attract Chinese tourists to shop in Malaysia. Outbound Chinese tourists reached 59 million in the first half of 2016.

Furthermore, the prime minister hopes Ma could help connect Malaysia’s small and medium-sized enterprises through its online portal to the Chinese market, the world’s largest consumer base.

Ma will be coming to Malaysia to launch the Digital Free Trade Zone in March next year to attend a global transformation forum organized by the Performance Management and Delivery Unit (Pemandu).

“We will discuss details of the incentives, regulations, etc. So, it will be quite an attractive package and many people will be compelled to engage in digital activities at the Digital Free Trade Zone,” Najib said during a speech at a session at the e-Entrepreneurs Conference 2016 at the Kuala Lumpur Convention Centre on November 09.

Ma is considered as the richest person in China with a net worth of around US$28 billion. In 2014, he was raked as the 30th most powerful person in the world in an annual ranking published by Forbes.

Alibaba’s new ties with Malaysia will further strengthen the Chinese e-commerce giant’s position in Southeast Asia. In April, Alibaba made its largest overseas investment with a US$1 billion deal for control of Singaporean e-commerce company Lazada Group SA.

Alibaba has placed Southeast Asia, alongside India, Brazil and Russia, as its key market in the company’s globalization objective to secure 2 billion new consumers outside of China.

“We acquired [Southeast Asia e-commerce] Lazada so that we can be in Indonesia as well as five other Southeast Asian countries […] obviously Indonesia being the largest market,” Alibaba Group co-founder and vice chairman Joseph Tsai said last week, as quoted by the Jakarta Post.

The appointment of Ma as Malaysia’s digital economy advisor came as a disappointment to Indonesia. In September, Indonesia’s president Joko “Jokowi” Widodo offered Ma to be an advisor to the Indonesian government, an offer Ma has reportedly widely accepted.

“I never say no,” Ma told the Jakarta Post. “I received the invitation from the government. I haven’t heard since,” he added.

Indonesia Warms up to Blockchain