Asia Pacific’s e-commerce industry has been “explosive,” generating over US$567 billion in total transactions in 2014 with China contributing US$440 billion, surpassing the US with US$140 billion. In the next five years, the region will most likely set the agenda for the global online retail market, according to MasterCard Asia Pacific.

Asia Pacific (APAC), which hosts 60% of the world’s population, is twice as likely to buy online rather than other groups in the world. In two to three years, MasterCard expects that the region’s middle class will expand to over 1.7 billion people in 2020 with China, India and Indonesia becoming the top three markets in e-commerce.

In a recent white paper, MasterCard addresses the top 10 industry transformations that will likely drive the evolution of e-commerce in the next three years, as well as their impact on consumers, merchants and issuers. 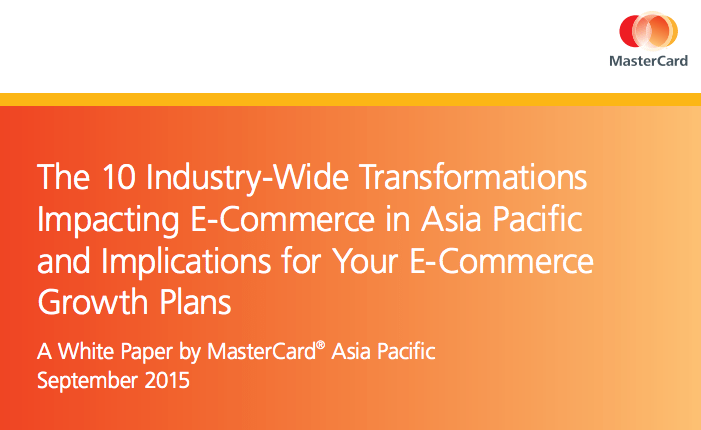 Mobile devices will be “a retail destination” as they allow people to access to supermarkets, marketplaces, boutiques and niche stores on-the-go. “Securing prime real estate on the home screen is critical, as this is where the war for the consumer will be fought,” the firm said.

Companies that use data intelligently and securely will “unlock the trust of the consumer.” If they get the equation right, they will be given permission to access “more touchpoints in people’s lives.”

Marketing to “bring magic to micro-moments” and drive transactions: advertising as we know it today will be replaced by campaigns that “respond to people’s immediate mental and emotional states.”

Data to drive intend: Data gathered from operating systems and mobile devices will inform what we buy, when we buy and who we buy from. We will be prompted to shop for things before we know we need them.

Reward systems and CRM programs will become critical for sustainable success. Merchants will need to deliver on their brand promise in a personalized and emotionally engaging way to build customer loyalty.

As financial data management will be democratized, every retailer will be able to set up a digital shopfront.

The use of biometric data from mobile and wearable devices will ensure constant identity authentication.

Through cutting edge technology in digitization, tokenisiation and authentication of card information, merchants won’t need to hold huge amounts of personal payment data that makes them a target for fraud.

The World Bank projects that the Asia Pacific region will continue to account for one-third of the global e-commerce industry.

The development of cross-border commerce, as well as the fact that the region has shifted from investment-led to consumption-led growth over the past decade, will largely contribute to Asia’s emergence as the largest e-commerce market in the world, according to MasterCard.

“A growing competitive landscape, an increasingly connected middle class, and innovation in mobile and digital technology will influence the development and direction of online retail for consumers, merchants, payment providers and issuers,” the document says.

Today in APAC, China, Japan and South Korea are the largest e-commerce markets. The firm expects that the Indian online retail market will match that of China in a decade.

“The opportunities are clear in South East Asia when you consider that the share of online sales in total retail average around 1.5%.”

How To Deploy Funds For Innovation