In the past year, the fintech industry in Thailand has witnessed significant growth but the latest push from the government is set to position the country as one of the region’s top fintech hubs.

The Thailand government is putting a particular effort on developing its fintech industry as part of the country’s broader Smart Cities and Thailand 4.0 initiative, which aims to integrate digital technology, energy and transport to improve the quality of life. 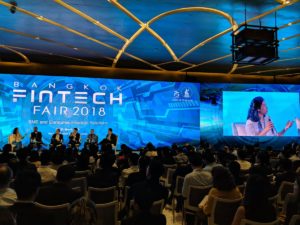 In particular, it is the Bank of Thailand (BOT), the country’s central bank, that has taken a leading role in creating a favorable fintech ecosystem, undertaking several key initiatives such as organizing the 2018 Bangkok Fintech Fair in March, introducing a National e-Payment Master Plan to turn Thailand into a cashless economy, and launching a fintech regulatory sandbox in June 2017.

During the 2018 Bangkok Fintech Fair in May, the governor of the BOT, Veerathai Santiprabhob outlined the central bank’s policy direction on fintech development, emphasizing three key opportunities that fintech brings to the table: productivity, by enhancing efficiency and lowering costs; immunity, by helping banks and businesses improve risk management; and inclusivity, by facilitating financial access.

PromptPay enables mobile fund transfers, using only the recipient’s mobile number or citizen ID number. As of January 2018, PromptPay claimed more than half of the Thai population had registered to the service, or about 40 million people, and over 173 million transactions processed worth 700 billion baht (US$22 billion).

The central bank is also working on numerous initiatives to deploy blockchain technology and improve a range of services including document authentication, cross-border payments and supply chain financing, Santiprabhob said in July.

Separately, the Thai Bond Market Association (TBMA), the country’s self-regulated securities body, is working on a custom token called Bond Coin that would accelerate the speed of corporate bond settlement in the country. TBMA said it received a go-ahead from Thailand’s Securities and Exchange Commission to begin working on a private blockchain network.

According to EY, Thailand has 128 fintech companies and although the country is lagging behind the likes of Singapore, Indonesia and Malaysia, the sector is rapidly growing.

Payments is the most crowded segment of fintech in Thailand, with players such as Omise, TrueMoney, and AirPay, but other segments such as investing and insurtech are also emerging. 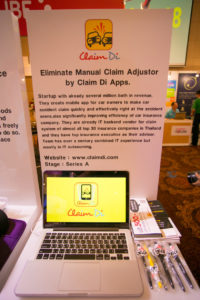 Claim Di, for instance, is a mobile application that facilitates communication and claims between drivers and their insurance companies. Finnomena offers investment advice through Nter, a robo-advisor which allows investors to create an investment plan and put money into mutual funds. StockRadars is a mobile-based stock analysis and trading platform. Masii is a financial products comparison platform. And startups like PeakEngine and FlowAccount, offer online accounting platforms.

Besides homegrown startups, Thailand has also welcomed numerous fintech startups from abroad. Examples include Singapore’s Vouch Insurtech, which launched last month in Thailand as Fairdee, and China’s e-commerce giant JD, which launched in Thailand last year with a focus on shopping and personal finance.

Indonesian peer-to-peer lender Investree recently raised its Series B funding round and unveiled plans to expand to Thailand by the end of the year, and Bithumb, one of South Korea’s leading cryptocurrency exchange platforms, has already established a Thai subsidiary and expects services in Thailand to begin at the end of October.

Singtel Wants to Let You Use Your E-Wallet to Pay Across Asia, Starting with Thailand

5 Mobile Payment Methods in Thailand that you Must Know