Blockchain To Cause A ‘Profound Technological Shift’ In Banking, Insurance, And Beyond

Poised to transform the financial sector by increasing efficiency, transparency and security, blockchain technology could reduce banks’ infrastructure costs by US$15 – 20 billion per year by 2022, an opportunity that all major banks and financial institutions are eager to seize.

Interest in blockchain, the technology behind the cryptocurrency Bitcoin, exploded during the past few years, with financial institutions around the world launching efforts to explore its potential opportunities for their businesses.

With nearly a billion dollars injected in blockchain over the past three years, interest in the technology is also reflected in investment trends. According to the Aite Group, banks and financial services firms are among the biggest investors in the sector. In 2015, they invested US$75 million in the technology, more than double the amount invested in 2014. 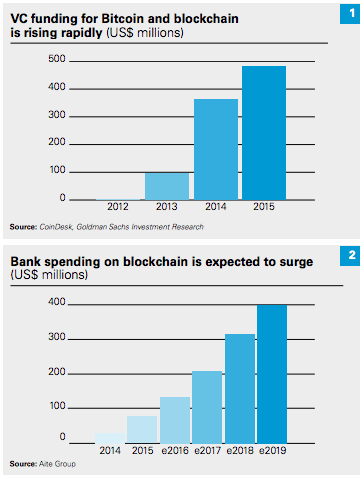 According to law firm White & Case, 2016 will be a year of continued innovation and experimentation for most large financial institutions that are exploring blockchain opportunities.

“It will take time for institutions to fully account for the benefits and risks that blockchain has in store. But few can afford to sit on the sidelines waiting for total clarity as the technology evolves and is deployed by competitors,” the firm says in a new report. “The pace of innovation will accelerate as technology and financial services continue to converge, and success will often depend on the ability to take reasonable action based on informed experience.”

“It is critical for institutions to actively participate in this cycle of innovation and disruption to ensure that they understand how technology is shaping the sector and that they are positioned to identify and pursue opportunities as the landscape evolves,” it advises. 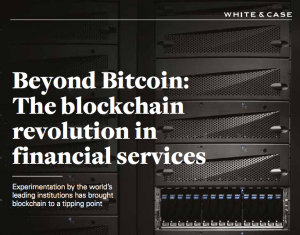 In a paper titled ‘Beyond Bitcoin: The blockchain revolution in financial services,’ White & Case highlights key applications for blockchain technology in the banking and financial sector.

Blockchain can be used to enable faster settlement at lower costs and with lower risks of fraud. In this case, a record of a change in ownership can be immediately inscribed on the blockchain, and payment and settlement of the trade can occur simultaneously. An example is Nasdaq’s Linq blockchain network, which enables private companies that have not yet been subjected to the recordkeeping demands of public listing to keep track of changes in the ownership of shares issued to founders, early investors and employees.

By dramatically cutting settlement time, blockchain technology allows to reduce the amount of cash and collateral that financial institutions need to hold to mitigate settlement risks.

Blockchain can also allow for the development of new exchanges that facilitate the trade of a variety of assets. In this scenario, a said exchange could allow for the trading of virtual tokens that represent underlying assets; whether they are tangible, like real estate, or intangible, like intellectual property.

Blockchain can streamline the process of registering assets. In the case of real estate, the technology can eliminate the need for title insurance to confirm the accurate of a local government’s property registry. Instead, an accessible ledger of property ownership can be built to reduce the time of transferring real estate ownership and reduce the associated costs.

Blockchain can be used to track the movement of goods, providing thus a highly secure supply chain management system resistant to fraud. An example is Everledger, a London-based startup that specializes in registering and tracking individual diamonds to document their provenance, track ownership and combat insurance fraud.

Blockchain technology allows for smart contracts with embed business rules. These contracts are executed automatically without human intervention, cutting out counterparties and intermediaries.

Blockchain also has the potential to transform bank regulation and supervision. For instance, blockchain technology can allow banks to track the progressive history of every transaction on their systems and ensure that the origin, destination and use of funds are clear and traceable.

Alongside the banking area, blockchain technology could also have a great impact on the insurance industry with possible use cases that include innovating insurance products and services for growth, increasing effectiveness in fraud detection and pricing, and reducing administrative costs. 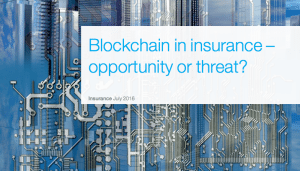 In its ‘Blockchain in insurance – opportunity or threat’ report, McKinsey points out three ways in which blockchain can facilitate growth for insurers. Blockchain technology can be used to create a customer-controlled system for identity verification or medical/health data and improve customer engagement.

It can also allow for the use of smart contracts to be applied to micro-insurances. This would allow for lower handling costs, as underwriting and claims would be handled automatically based on defined rules.

Another interesting trend in the insurance business is the Internet-of-Things. Cars, electronic devices and home appliances can have their own insurance policies registered and administered by smart contracts in a blockchain network. That would allow for automatic damage detection which could then trigger the repair process, as well as claims and payments.

That said, the potential of blockchain technology lies well beyond the banking and insurance sectors. As Don Tapscott and Alex Tapscott put it in their new book ‘Blockchain Revolution: How the technology behind bitcoin is changing money, business, and the world,’ blockchain could well cause a “profound technological shift,” shaping “the next era of prosperity in finance, business, healthcare, education, governance, and many other fields.”

Featured image by bioraven, via Shutterstock.com.

Decentralizing Energy in Singapore for a Future Grid