Apple Pay Teams Up With Amex To Launch In Singapore

Apple is partnering with American Express to bring Apple Pay to “key global markets,” Apple CEO Tim Cook announced during the earnings call for the fourth fiscal quarter of 2015.

According to Amex, Apple’s digital wallet and mobile payment service will launch in Singapore, Hong Kong and Spain in the beginning of 2016, the company said in a statement.

Apple Pay, which is currently available in the US, the UK, Canada and Australia, allows users to connect their credit or debit cards to a mobile wallet, enabling consumers to make payments using their iPhones, Apple Watch-compatible devices and iPads at compatible NFC-based payment terminals.

Users can add their payment cards to the digital wallet by entering the numbers manually or by capturing the card information with the iSight camera.

Released in October 2014, Apple Pay started with 200,000 locations in the US and will soon surpass one million, the firm claims. In the US, Apple Pay is supported by a number of companies including Whole Foods, Staples, Petco, Panera, Dunkin’ Donuts and Toys R Us. 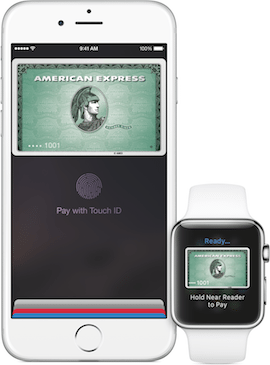 The partnership with Amex will provide Card Members in Hong Kong, Singapore and Spain with the ability to link their consumer, small business and corporate American Express Cards to the digital wallet.

Users will be able to pay using their iPhone, Apple Watch and other compatible Apple devices, in stores where contactless payments and American Express are accepted.

According to Jennifer Bailey, vice president of Apple Pay, the partnership with Amex, a global issuer, aims to bring Apple Pay to strategic markets and to as many of the firm’s customers around the world.

Amex’s vice president, mobile products and payments Tony Prentice welcomed the partnership, stressing that it is critical for his firm “to be on the forefront of seamless and innovative payment solutions.”

Card Members who use an eligible American Express Card with Apple Pay will get a number of feature including real-time notifications and details for purchases, as well as a seamless connection to the Amex Mobile app for account monitoring and servicing.

When a Card Member adds a card to Apple Pay, the actual card numbers are not stored on the device. Instead, a unique Device Account Number is assigned, encrypted and securely stored in the Secure Element on their device. Each transaction is authorized with a one-time unique dynamic security code.

On the iPhone, Apple Pay users can pay with Touch ID, a one-touch feature. Users simply have to hold their phone near the contactless ready with the finger on Touch ID. Another option is to double-click the Home button when the iPhone is locked to access Wallet and quickly make a purchase.

On the Apple Watch, users just need to double-click the side button and hold the display up to the contactless reader.

Instead of Loose Change, Cheers Shoppers Can Transfer Change into EZ-Link Card