Like its ASEAN counterparts, Thailand is pushing for greater of adoption of mobile payments with industry participants, including government agencies, financial institutions and fintech companies, all actively working towards increasing awareness and accelerating adoption.

Payments is the largest fintech segment in Thailand, representing 30% of the country’s total 100+ fintech companies, according to EY’s ASEAN Fintech Census 2018 report, and over the past five years the payments landscape has significantly changed, presenting consumers with an increasing number of alternative ways to pay for goods and services.

One notable trend is the evolution of mobile wallets into broader ecosystems. For instance, the TrueMoney Wallet has expanded into providing services that include cross-border remittances, payment gateways, cash on delivery, as well as specialized top-up services like gaming.

Similarly, companies including LINE, Garena, and Lazada have all taken advantage of their large user bases to promote a wallet service. LINE offers Rabbit LINE Pay, which serves some 4.5 million users in Thailand, Garena provides the AirPay wallet, and Lazada launched the Lazada Wallet in January 2018.

Most recently, Southeast Asia ride-hailing firm Grab announced it was partnering with Kasikornbank to roll out its mobile wallet GrabPay and other financial services in Thailand starting in 2019.

Such services seek to create an ecosystem that ties the user into the brand via multiple lifestyle services.

Towards a cashless economy

Besides the tech companies, Thailand’s government too has been actively promoting digital payments by launching their own initiatives. A major one is the electronic interbank transfer system, PromptPay, which has been playing a key role in driving digital payments.

PromptPay ties ID numbers and/or mobile phone numbers with bank accounts to allow users to transfer money more easily. The platform is part of the national digital payment scheme, a project designed to move Thailand towards a cashless society. It is part of the government’s Thailand 4.0 initiative, which seeks to create a value-based economy driven by innovation, technology and creativity.

PromptPay was launched in 2017, and as of April 2018, had processed 97 million transactions, totaling THB 370 billion in transfers, across 37 million savings accounts. It had 42.6 million registrants as of July 2018.

In a bid to remain relevant and counter the threat from the fintech sector, top Thai banks have been launching new payment platforms and investing heavily in their digital transformation.

Since 2014, Kasikornbank has been investing around THB 480 million annually to enhance its digital banking services. As of year-end 2017, KBank had 7.3 million users on its mobile banking channel, recording around 3 billion transactions during the year, a tenfold increase from 2014.

In November 2018, Kasikornbank put in US$50 million into Grab as part of their strategic partnership, after collaborating with Singtel to launch VIA, a QR code-based cross-border mobile payment, in Thailand, back in October.

Already, these initiatives have begun showing results. In February 2018, the Bank of Thailand (BOT) published data showing a surge in the use of mobile and Internet banking in Thailand, reports Thailand Business News. 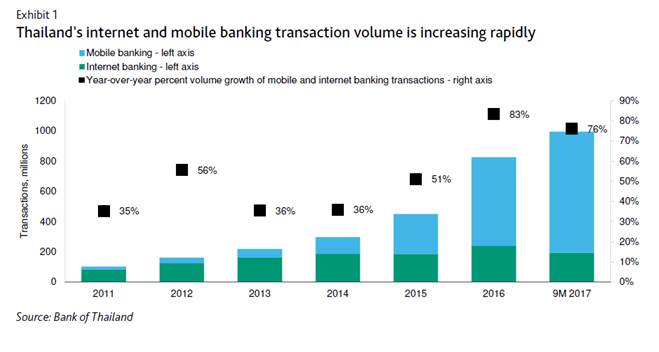 New Wallet in Vietnam: SmartPay Acquires More Than 200,000 Users Since Its Launch

9 out of 10 Singaporeans Interested in Biometrics Authentication and Payments