Two recent studies have found Singapore to be the world’s most prepared city for the age of artificial intelligence (AI), and the global leader in terms of smart city effort.

The first research, conducted by the Oliver Wyman Forum, ranks 105 international cities in terms of their preparedness for the technological and digital disruption that will be spurred by AI.

The index ranks cities on four key criteria: the quality of a city’s plan (Vision); a city’s ability to execute on forward-looking plans (Activation); the extent and quality of talent, education, and infrastructure (Asset Base); and how the interplay of Activation and Asset Base are impacting its overall momentum (Trajectory).

One key finding from the study is that although megacities like London, New York and Paris, have well-scaled business communities and talent pools, smaller cities can be just as competitive technology-wise. In fact, half of the top 10 cities – San Francisco, Boston, Amsterdam, Stockholm, and Sydney – have fewer than 5 million residents.

Yet, despite the relatively good scores of some, many improvements still need to be made in order for these cities to be fully prepared for the impacts of next-generation technology. Oliver Wyman notes that none of the reviewed city ranks among the top 20 across all four criteria. 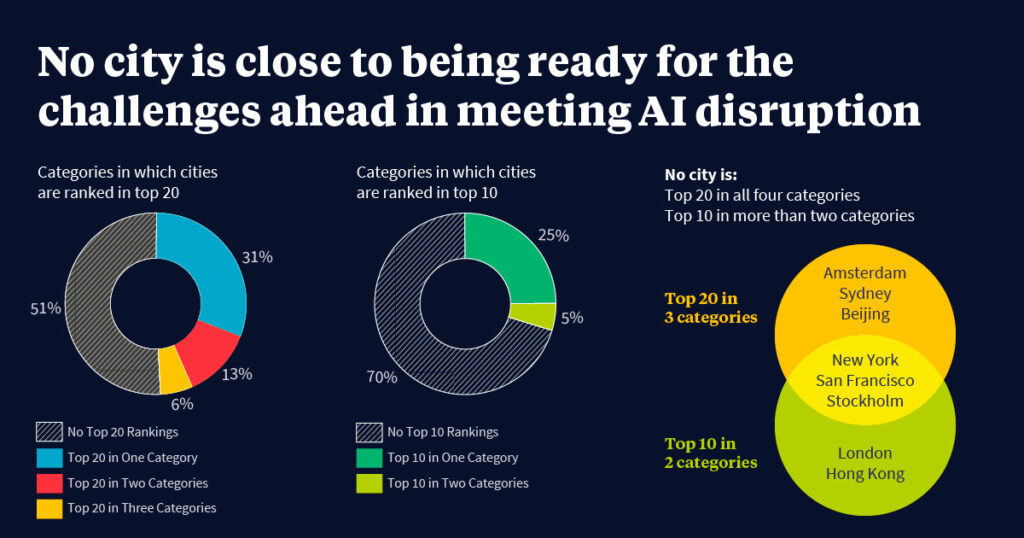 One main issue here, according to Timocin Pervane, co-leader of the Oliver Wyman Forum’s City Readiness initiative, is that most cities have not yet addressed the major societal changes driven by AI and other technologies.

“Most cities plan to use AI to become ‘smart cities’ or the next Silicon Valley, but few focus on the bigger, strategic social and economic opportunities and challenges, such as the need to retrain people who may be forced to look for new work as a result of the broad deployment of AI,” Pervane said.

The second study, called the IMD Smart City Index 2019, provides a ranking of 102 cities worldwide based on their efforts and success in embracing smart technologies to improve the lives of their citizens.

The report named Singapore “the smartest city in 2019.” The city-state was recognized for using technology to improve the quality of life, and surpassed the likes of Zurich, Oslo, Geneva and Copenhagen.

Singapore’s Smart Nation initiative was launched in November 2014 with the purpose of harnessing infocomm technologies, networks and big data to create tech-enabled solutions. Some areas of focus include enhancing public transport networks, enabling successful aging, ensuring a secure but open data marketplace, and incorporating the use of cashless payments into citizens’ lives.

The Land Transport Authority has announced that by 2020 all payments for public transport in Singapore will be made through digital payments only, and a public-private initiative has enabled over 500 hawkers in the city-state to accept cashless payments.