In November 2008, a paper was posted on the Internet under the name Satoshi Nakamoto titled ‘bitcoin: A Peer-to-Peer Electronic Cash System’ that detailed methods of using a peer-to-peer network to generate what was described as “a system for electronic transactions without relying on trust.”

In January 2009, the bitcoin network came into existence with the release of the first open source bitcoin client and the issuance of the first bitcoins, with Satoshi Nakamoto mining the first block of bitcoins ever, known as the “genesis block”.

Bitcoin the digital currency was the first successful application of blockchain. Now, innovative startups are using blockchain technology to provide greater efficiency, transparency and security in all sorts of industries, notably in financial services.

Today, we take a look at the landscape of blockchain companies in the financial services industry.

There are three types of blockchain networks:

Non-permissioned public ledgers such as the Bitcoin blockchain and Ethereum, are blockchains that anyone in the world can read, send transactions to and expect to see them included if they are valid. Also, anyone can participate in the consensus process which consists in determining what blocks get added to the chain.

Permissioned public ledgers are blockchains in which there are no restrictions on reading blockchain data and in which transaction processing is performed by a predefined list of subjects with known identities. An example is Ripple, a real-time gross settlement system, currency exchange and remittance network. Ripple relies on a common shared ledger, which is a distributed database storing information about all Ripple accounts. The network is “managed by a network of independent validating servers that constantly compare their transaction records.”

This group includes companies that are using the Bitcoin protocol and companies that provides products and services related to bitcoin, the digital currency.

Alongside B2C companies, B2B blockchain companies are developing and providing blockchain tools to other enterprises. These firms include Chain, which develops enterprise blockchain infrastructure for the financial industry; Symbiont, a “smart securities” issuance and trading platform; and Blockstream, a tech company focusing on sidechains.

Other companies are designing and providing blockchain technologies that aren’t based on Bitcoin; most of these ventures have built their own infrastructures.

For instance, Eris Industries is the tech company behind Eris, a free and open source Universal Blockchain Platform allowing anyone to build their own secure, low-cost, run-anywhere applications using blockchain and smart contract technology. 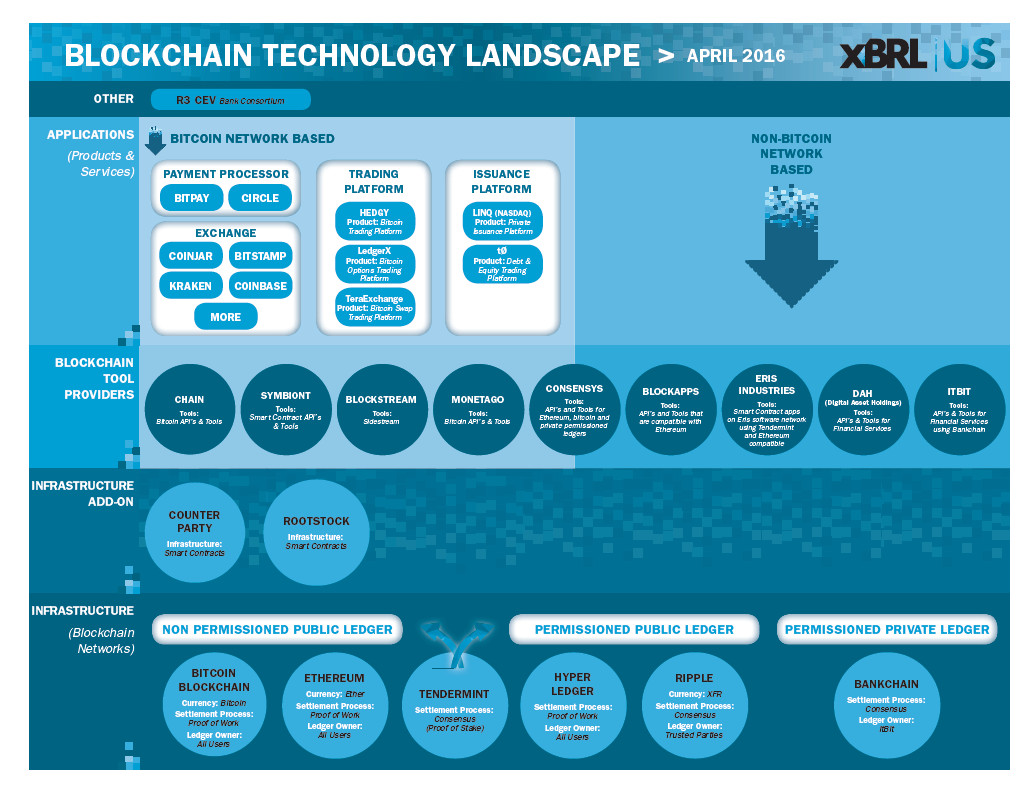