Asia seemed to have caught the digital banking bug following Hong Kong’s issuance of the 8 virtual banking license. With Singapore positioning itself as a fintech hub in Asia and beyond, Monetary Authority of Singapore’s (MAS) announcement that it is issuing 5 licenses by 2020 should come as no surprise to anyone.

Digital technologies disrupting industries are a tale as old as time and the financial services sector is not any different.

How Will it Affect Singapore’s Incumbents?

For the most part, we don’t expect Singapore’s larger local banks like DBS, OCBC and UOB to be significantly affected. These banks have been investing a great deal in their digital offerings in the past few years and a new breed of banks possibly eating into their margins will only serve as motivation for them to step up their digital game.

After all, the intent is for the new digital players with innovative business models and strong digital capabilities to cater to the under-served segments of the market. As these are segments that the incumbent banks are less inclined to serve because of their lower profitability or higher credit risks, it is unlikely that in the near term for incumbent banks’ market share to be significantly eroded.

Having said that, if we were to look forward 5 to 10 years from today in a more digitally evolved economy, incumbent banks may rue the day that they ignored these segments as the under-served of today will then have “grown up” to become attractive and profitable segments which have become accustomed to relationships with digital-only banks.

During the announcement, Senior Minister Tharman Shanmugaratnam and Chairman of MAS emphasized that the regulator is committed to “allowing for greater competition and spurring innovation in finance” but he also stressed that Singapore “must retain strong local anchor and trust in the banking system.”

This again points to Singapore’s new digital banking licenses focusing on market segments that are typically underserved by traditional banks.

Compared to many of its ASEAN counterparts, however, Singapore enjoys a high banked population rate of over 96%, which is to be expected of a country that is largely urban. Therefore, when these digital banks eventually come out to state that they will be focused on financial inclusion, it will be defined differently compared to many of Singapore’s neighbors.

SMEs are of course an immediately obvious segment that the new digital banks could tap into, given that 99% of companies in Singapore are SMEs and they employ 72% of the population, according to the Department of Statistics.

Compared to incumbent banks who may find some of these borrowers not suited for their risk profile, the newer digital banks could potentially come up with new data models that will enable them to better assess and provide more financing creditworthy SMEs. With players like Validus also eyeing this space, we could also potentially see more (invoice) financing products pushed to this segment.

On the consumer front, with 148.8% mobile penetration rate and roughly 22% of the population consisting of millennials, the digitally savvy segment should be an obvious choice.

Unburdened by the need to patchwork legacy systems these new banks can start from scratch to provide superior UX/UI to their consumers. They are also able to make changes, roll out new services to respond to changing market demands at a much faster pace compared to their incumbent counterparts — giving them a significant advantage over this segment of customers.

How do Incumbents Respond to a New Reality?

Faced with this new reality there are essentially 5 routes that incumbent banks could take, the first 3 which is to upgrade legacy systems, upgrade digital interfaces and integrating new layers with old should be part of an incumbent bank’s strategy, regardless. 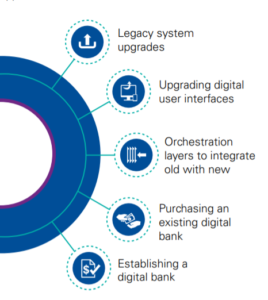 Source: KPMG, The Future is Open

We are increasingly seeing banks taking the route of purchasing an existing bank and establishing their own brand new digital bank.

Starting a bank can provide a successful defense against new challengers with improved services and open capabilities. The new, more competitive business model provides for lower costs, greater agility, and greater modularity. New technology stacks put incumbents on a level playing field with upstarts and customers can be readily migrated over.

Alternatively, incumbent banks could also explore the option of outright purchasing a digital bank. A number of incumbent banks have already employed this strategy, Canada-based Scotiabank, for example, acquired ING Direct as far back as 2012. Purchasing an existing digital bank gives the incumbent the flexibility to change or retain the purchased brand name.

Either way, the important is, as Singapore’s financial services sector enters this new chapter, incumbent banks must not remain complacent with its market dominance or it might run the risk of shrinking margins in the long run. 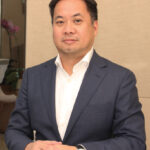 Tek Yew is Head of KPMG in Singapore’s Financial Services Advisory practice, where he leads engagements with clients on areas such as digital transformation and customer growth strategies.Prior to KPMG, Tek Yew set up a venture accelerator programme which incubated technology start-ups during the dotcom era, and headed the financial services practice across Greater China and South East Asia for another Big 4 firm. He also held roles of Vice President / Head of Hewlett Packard’s (HP) Consulting & Integration business across Asia Pacific, where he was responsible for HP’s innovation center in Singapore.