Andreas M. Antonopoulos, a technologist, serial entrepreneur and one of the most well-known and well-respected figures in the bitcoin space, is about to begin a Southeast Asian tour, starting with Phnom Penh, Cambodia, and Ho Chi Minh City, Vietnam.

Antonopoulos is the author of “Mastering Bitcoin,” one of the best technical guides to bitcoin, and “The Internet of Money,” a collection of talks about the reasons that make bitcoin important.

As a bitcoin entrepreneur, Antonopoulos has founded a number of bitcoin businesses and launched several open source projects. He is the founder of RootEleven, a technology content creator and incubator working in digital cryptocurrencies, and Third Key Solutions, where he serves as CTO. Antonopoulos is also a public speaker and an advisor to several bitcoin and cryptocurrency companies.

On February 17, 2017, from 7 to 9pm, Antonopoulos will give a speech at the TRYKE Workspace, in Phnom Penh, Cambodia. The event is organized by Coin Cafe, a bitcoin-themed restaurant and cafe located in the capital city, which also holds bitcoin meetups and do bitcoin/fiat exchanges.

On February 20, 2017, starting from 6:30pm, Antonopoulos will speak at a meetup event organized by Bitcoin Saigon. The event will take place at Shinhan Future’s Lab Vietnam, in Ho Chi Minh City. 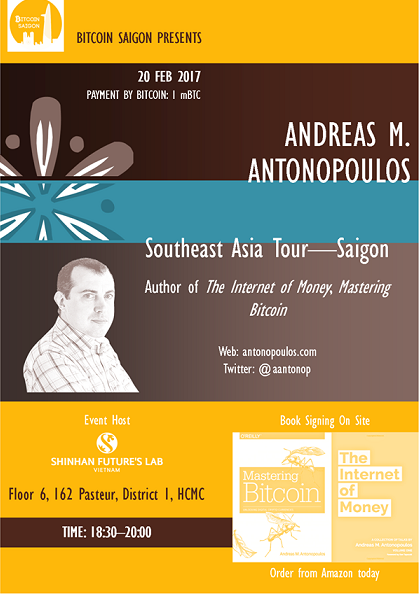 On March 20, 2017, Antonopoulos will share his thoughts on bitcoin, blockchain technology and the future of money at the Singapore Management University. The event is organized by the Bitcoin Singapore Meetup and the Ethereum Singapore Meetup, and is sponsored by ACCESS, the Singapore Blockchain and Cryptocurrency Association.

Another event was unveiled earlier this week in Kuala Lumpur, Malaysia, on February 22. No further details have been announced yet. 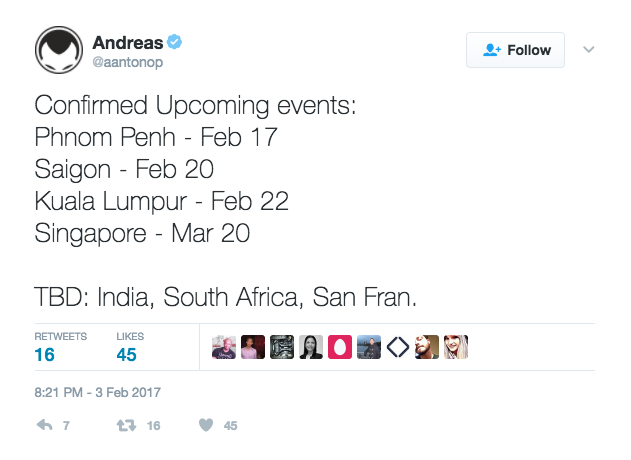 As one of the most prominent figures in the bitcoin space tours around Southeast Asia, another personality in the tech startup scene is set to give a presentation on fintech startup investments in Vietnam.

Eddie Thai, venture partner at 500 Startups, will speak at a Fintech Vietnam Meetup event on March 09, 2017. Thai serves as a general partner of 500 Startups Vietnam, a US$10 million fund that aims to make 100-150 investments into Vietnam-connected startups.

500 Startups Vietnam is particularly interested in ventures tackling in business-to-business and enterprise software-as-a-service, fintech, and e-commerce.

In addition to financing (typically around US$100,000 to up to US$250,000 per deal), portfolio companies access to 500 Startups’ international network of 3,000 mentors and founders, US$1.5 million of credits with partners like Amazon and Facebook, and other support to help them scale their business.

Blockchain Use Cases in Financial Services