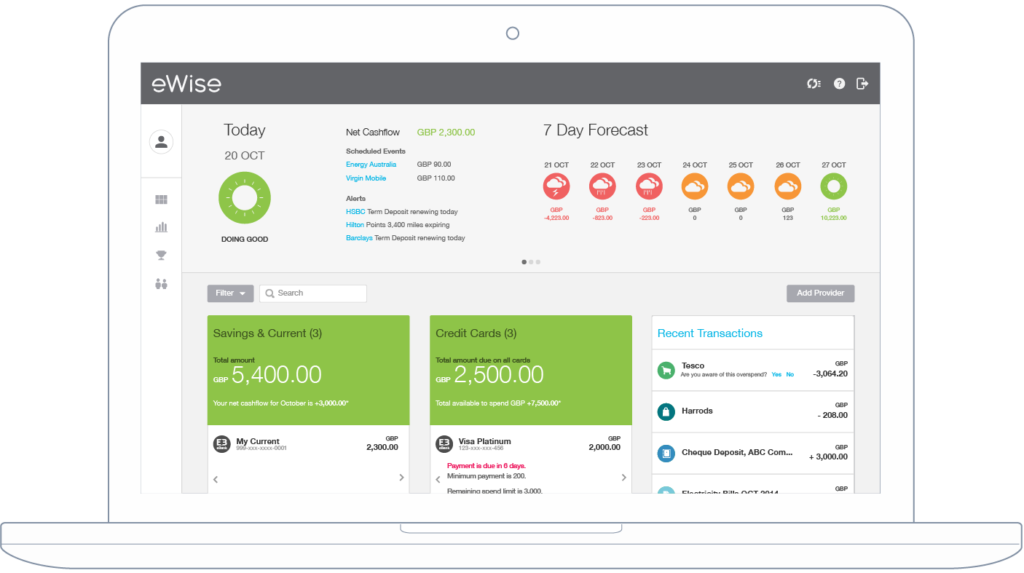 It comes with the company’s patented Personal Data Vault (PDV) technology, which encrypts and stores a user’s financial data on a device, differentiating eWise from its competitors who typically provide “server-side” account aggregation.

The PDV is a downloadable component of the eWise solution and can reside on a smartphone or a desktop computer for instance.

The PDV can be used to aggregate financial information such as account balances and transactions but also information from retail affinity, airline reward programs and utility companies.

Most recently, it partnered with Singaporean startups PiSight and FinGo Ventures to provide the companies with its technologies. PiSight is using eWise’s Personal Data Vault in its digital financial assistant platform PiMoney. The Personal Data Vault provides PiMoney users with extra security as well as full control over their data.

FinGo Ventures partnered with eWise back in November 2016 on the company’s mobile payments and bank account aggregation app FinGo.

“Our patented eWise Aegis platform enables financial data aggregation to be private, secure and portable,” David Hamilton, CEO of eWise, said in a statement. “It never discloses logins or passwords to FinGo, eWise or any third-parties. This combination of expediency and security is vital, particularly for Singapore’s upwardly mobile professional classes.”

The partnerships are part of eWise’s broader expansion push in Southeast Asia which the company triggered in early 2016.

“Southeast Asia is one of our fastest growing regions, with tremendous innovation occurring across all aspects of the financial services value-chain,” Hamilton said back then. “We are investing significantly in building a deeper and richer data aggregation network for all of the financial services actors in the market, ensuring aggregation of bank accounts and portfolio transactions, positions and balances from a multitude of different custodians.”

An international provider of Financial Data Aggregation API and Money Management solutions. eWise has delivered solutions to many of the world’s most innovative financial services brands including retail banks, wealth management firms, and fintechs. eWise solutions are used by many financial institutions such as HSBC and Westpac.

Founded in 2000 and headquartered in Switzerland, eWise has operations in Europe (Switzerland and UK), Asia (Singapore and Philippines) and Australia. eWise holds patents in the US, Asia-Pacific and Europe.