Remittances has long been recognized as one of Bitcoin’s most obvious use cases. Sending money from one Bitcoin wallet to another is about as easy as sending an email. The impact on the 230 million migrants sending $430 billion in personal funds back home each year cannot be understated.

Between 2013 and 2014, startups all around the world were being founded with the sole aim of building the “Western Union killer” that Bitcoin technology theoretically enabled.

The 160-year old Western Union is the world’s largest money transfer company, and has a market cap of nearly $10B.

Its size and brand made it an obvious target for the diehard Bitcoin fans, and it’s been, on numerous occasions, likened to a dinosaur with its “dying” business model.

And yet four years have passed and Western Union remains just as relevant as it has always been. The great money transfer revolution so aggressively foretold by the Bitcoin community hasn’t really happened yet.

But a major sea change in such a fundamental, entrenched industry takes time to fully coalesce, and although Bitcoin remittance startups have not yet overthrown the incumbents they rail so mightily against, significant strides have indeed been made over the past four years.

In my book, Reinventing Remittances with Bitcoin, the process of using Bitcoin as a remittance backend settlement process is thoroughly examined and explained. Every aspect of running a Bitcoin remittance business is explored, from building the first and last miles to managing volatility risk to working with regulatory requirements in various countries, with numerous real-world examples and plenty of current data. 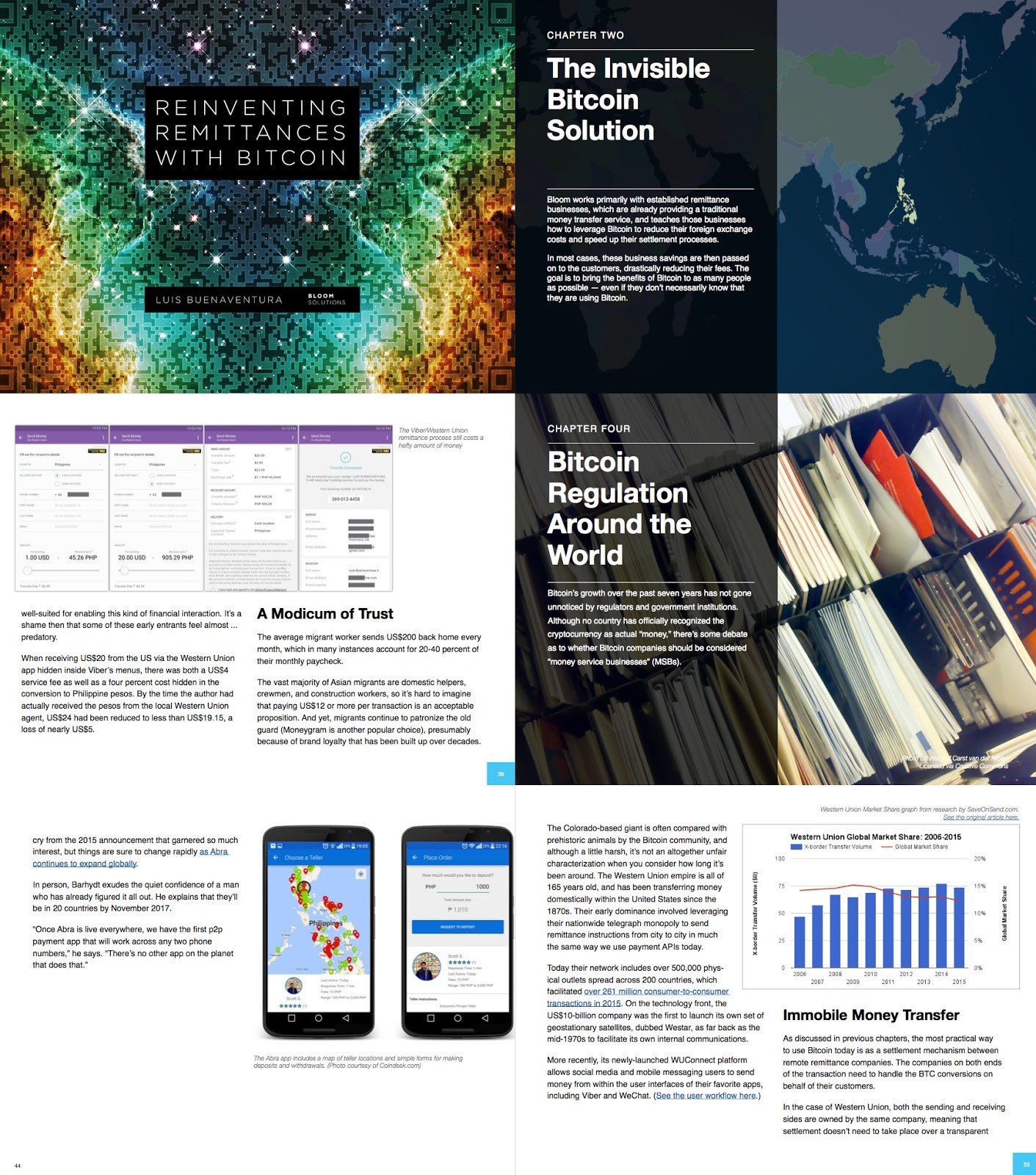 Much of the information is compiled from three years of exclusive focus on the Bitcoin remittance concept, and is an aggregation of strategies employed by both my startup BloomSolution and other startup founders who have kindly shared their knowledge.

Several chapters are devoted to exploring the differing approaches of half a dozen Bitcoin remittance startups from different parts of the world: Abra in the US, Bitspark in Hong Kong, BitPesa in Kenya, AirTM in Mexico, Payphil in South Korea, and OKLink in China.

Each startup has a unique take on the problem, and often must contend with different sets of challenges in their respective locales.

The conversation around Bitcoin remittances has fallen relatively dormant these past two years, and deserves to be reawakened. With fewer practitioners and a lot more practical experience between them, the industry has both narrowed in its focus and deepened in its knowledge.

Traction and customer adoption, almost non-existent in 2014, has now grown to an inspiring size.

In South Korea, for instance, Bitcoin has quietly grown to handle about 20% of the remittances being made to the Philippines. It’s the most successful Bitcoin remittance corridor currently in operation.

In Singapore, meanwhile, the Bitcoin remittance industry has been faced with various challenges. The 2015 startup Toast originally used Bitcoin in its remittance process, but found it was a barrier to fundraising, and has since eliminated the cryptocurrency from its model.

One of the older Bitcoin remittance startups, Coinpip, now focuses purely on business payments, and does not currently handle money transfers for personal use.

Regarding the Singaporean government’s position on Bitcoin remittance startups, Coinpip cofounder Alexander Angerer says it’s “premature to say.” He further explains that the Money Authority of Singapore (MAS) is drafting a new payments and remittance framework and solicited feedback from the public in late 2016.

The MAS’ position seems to be one of consolidation, merging currency conversion and money transfer into a single regulated activity. It’s the same strategy the Philippines’ Central Bank took with their own circular earlier this month.

As the industry continues to mature, the conversation will shift more and more to macro-topics like renewed regulations and economic impact. But in order to fully appreciate that level of discussion it’s important to have a fundamental understanding of how the current remittance startups operate and how they present a viable alternative to the incumbents.

With this book, those fundamentals are now available in a single, easy-to-digest volume.

Luis Buenaventura is a Manila-based entrepreneur specializing in cryptocurrencies, and has been focusing on the Bitcoin remittance space since 2014. With his startup Bloom, Luis helps money transfer businesses improve their processes with Bitcoin and the blockchain. He blogs regularly at https://medium.com/cryptonight.